Just last week, Disney announced Disney+ will have apps for iOS, Apple TV, Android and Xbox One, along with previously known devices such as the PlayStation 4 and Roku. Here, at the D23 Expo, I had the chance to check out how the Disney+ application works on an Apple TV. As you can see in the picture above, the Disney+ app looks like most Apple TVs, but Disney hopes to make it stand out from the rest by offering a heavily curated and personalized experience for every viewer — which it will do with a combination of human editors and machine learning algorithms. If you’re a Star Wars fan, for example, the Disney+ app will recommend shows and films from that franchise, as well as content others like you are watching on the service.

Michael Paull, president of Disney Streaming Services, told Engadget the idea with the Disney+ app is to make it “simple, elegant and easy to use,” regardless what device you’re watching on. At the same time, he said, it’s important for every user to have a unique viewing experience on the app. That’s why the service will launch with up to seven user profiles per account, which will let each person have their own watchlist and sections such as “Recommended For You” and “Continue Watching.” If you use streaming services like Netflix and Hulu (which is majority-owned by Disney), these may seem like basic features, but it was important for Disney+ to have them from day one.

On the Home page of the Disney+ app, you’ll see a carousel with big imagery, which will rotate new and noteworthy series and movies. If you have Disney+ on day one, you can expect The Mandalorian and Captain Marvel to be up there, and the carousel will change periodically as Disney brings more Originals and movies to the service. Right below that, there’s a set of main tiles that are organized by studio brand, rather than genre. Paull says the goal with these studio tiles being front and center is to not overwhelm people with random choices, and this gives them an easy way to get into the films or series they love the most. 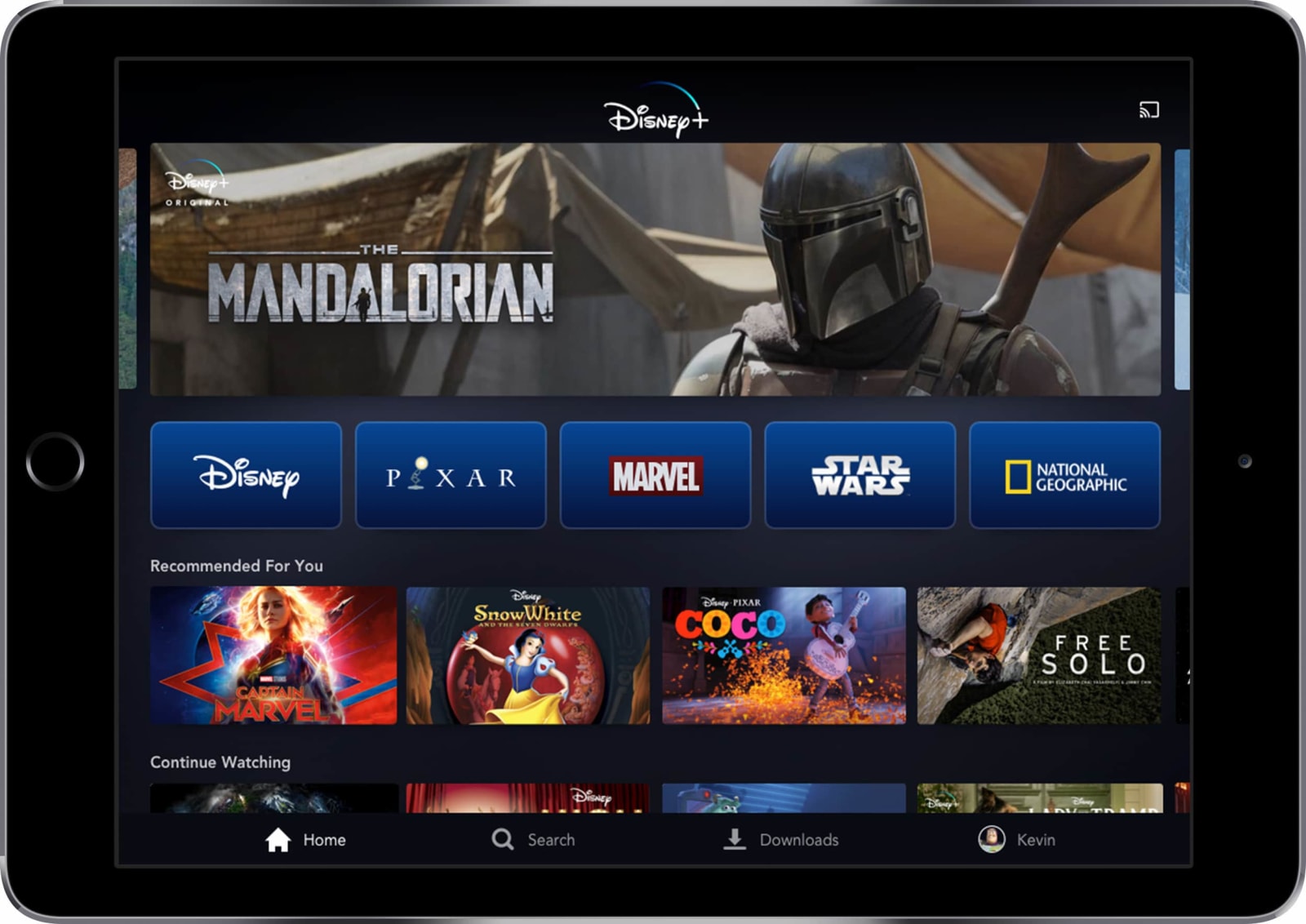 Each studio tile comes to life as soon you click or tap on it. If you go into Disney, you’ll instantly get an animation of Disney’s Magic Kingdom, while the Pixar one will bring up the studio’s iconic lamp intro. When you’re inside the studio hubs, hovering over any film or series tile is going to bring up a clip to preview it. If you click on a movie like Avengers: Infinity War, you’ll find a written synopsis, extras and related films.

Naturally, Disney+ will also have a section for Originals, which will highlight and make it easy to find all of its first-party content. Aside from shows like The Mandalorian and High School Musical: The Musical: The Series, which will be available on November 12th, Disney announced at D23 Expo that it has a bunch more in the works, such as Marvel’s Ms. Marvel and She-Hulk as well as a new Lizzie McGuire original. There’s also going to be a feature that will let people create profiles which are programmed for children seven and under, which are organized by characters (e.g. Mickey Mouse and Disney Princesses) instead of shows or movies. According to Paull, the company found that this feature resonated more with kids.

The Disney+ mobile app, meanwhile, will support offline downloads. Disney says the number of shows and movies you can download is unlimited, so the only restriction is the amount of free storage you have on your smartphone or tablet. That’s on top of the fact Disney+ will stream content in 4K, HDR and Dolby Atmos — which is included with the standard $6.99 plan, or the $12.99 bundle with ESPN+ and Hulu. What’s more, if you’re watching a movie or show on, say, the Apple TV or Xbox One and pause, you can continue watching where you left off on your other devices. (I asked about Amazon Fire TV, but Paull said there was nothing to share right now, though Disney’s plan is to be on as many platforms as possible, he said.)

A big question about Disney+ before launch was how it would handle people’s worst kept secret: password-sharing on streaming services. While Disney+ is going to be limited to four concurrent streams per account, Paull says he’s not too worried about that problem, since he believes the $6.99 monthly fee will be reasonable enough for people to want to get an account of their own. “When we made the decision about prices, we knew it had to be really strong” he said, “And by pricing it [at $6.99], we knew that good value would incentivize people.”

Based on the app I saw today, Disney+ seems to be quite polished for a product that won’t launch for another couple of months. At this point, it feels as if the company is just waiting for its original content to be ready. I do wish Disney would’ve played The Mandalorian for me during my demo, but sadly that didn’t happen. And believe me, I asked.