Elliot Wright has been keeping fans up to date with his plans to rebuild Olivia’s restaurant in La Cala, Marbella, after a devastating fire ravaged the building.

The former Towie star, 41, who is the cousin of Mark Wright, claimed that the fire was caused by ‘arson’ after the restaurant he built six years ago burned down.

He revealed that he plans to reopen it this summer, but admitted there were some unexpected setbacks in the rebuild.

Elliott explained on Instagram on Monday: ‘I’d say it’s been a productive day but it’s difficult to be positive all the time. Been a few issues today.

‘One of my roofs needs to come down, that’s gonna put me back a week, which is obviously very upsetting for me, but we’re all pushing on.

‘It’s a bad day today, to be honest with you. I’m trying to be positive, but at times it’s a bit tough.’ 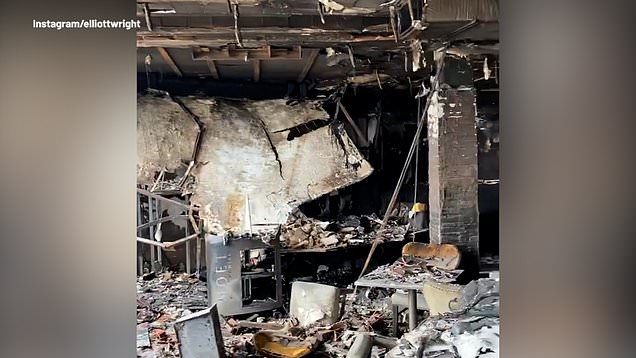 He added: ‘Tomorrow is a new day, I’m going to try and be positive and try and crack on.

‘Today doesn’t seem to be a good one but I can’t be good all the time, it’s going to be tough – I knew it wasn’t going to be easy.’

Elliott shared video footage of the devastation caused by the fire, which he believes was caused deliberately, revealing that the interior and most of the building had been completely destroyed.

He added: ‘So yes my dream has been cruelly taken away from me by some spiteful nasty people, for whatever reason I will probably never know, all that matters really is that I will rebuild and WILL be back.

‘@olivias_la_cala 2021 may be delayed more then we wanted… but we have all waited long enough, a little longer and we will be back with a bang..

‘I want to thank everyone who has came with offers of help or a simply kind message, I’ve genuinely been touched, including my Spanish community as well as the mayor Josele Gonzalez, you have all been amazing, you realise in time of trouble the people that are there for you…’

The fire began at 5.30am on Monday, April 26, just weeks after Elliott lost his father to coronavirus at the age of 66.

Nobody was inside the restaurant at the time of the fire and there were no injuries.

MORE : Towie star Elliott Wright devastated as Spanish restaurant burns down in huge blaze a month after his dad’s death