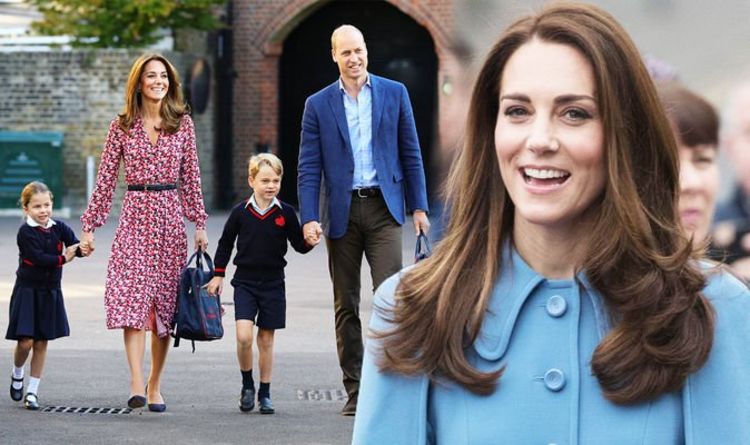 Kate and Prince William had their first child, Prince George, seven, in 2013.

They have since become the parents of Princess Charlotte, five, and Prince Louis, two.

Prince George is third in line to the British throne and all of the children are likely to have important roles in the Royal Family.

However, they mostly stay out of the public eye which could be due to their young ages.

When the family do appear out together, Kate has been praised for her parenting style.

The techniques she uses with her children are often different from what has been done by royals before, parenting expert and managing director at Kiddies Kingdom Mohammed Patel said.

He commented: “Kate and William have always shown an interest in mental health and wellbeing.

“Their honesty in talking about her own struggles is refreshing and, in some way, unheard of for the Royal Family.

“Kate never shies away from talking about uncomfortable topics and her parenting style reflects this, making sure she is as open and honest with her family as possible.

“Whilst it is important not to overwhelm children, instilling clear communication from a young age will help them feel confident and independent enough to make their own decisions.”

Since becoming a mother, Kate has spoken openly about parenting.

This year she shared her own struggles with homeschooling during the coronavirus lockdown.

By speaking out herself she could help encourage the indepence of her children, the expert suggested.

The Duchess of Cambridge is also no stranger to showing affection in public with her children.

He added: “In the past it would be unheard of for a royal parent to kneel down to their child at a public engagement, but showing this kind of affection to her three children has become the norm for Kate.

“When one of her children become distressed or upset in public, her calm and relaxed nature becomes apparent as she only has to crouch by their side to reassure them.”

Her affectionate parenting technique has not always been used by royals in the past.

However, Kate seems more focused on doing what she thinks is right for her children rather than what has been done before, the expert explained.

“As her children grow up, it’s likely Kate will treat them as equals and not tower over them as a figure to be feared,” Mohammed claimed.

“This is a less-traditional parenting style that would not have been used by previous royals, demonstrating how Kate is breaking the norm and paving the way for a new type of royalty.”