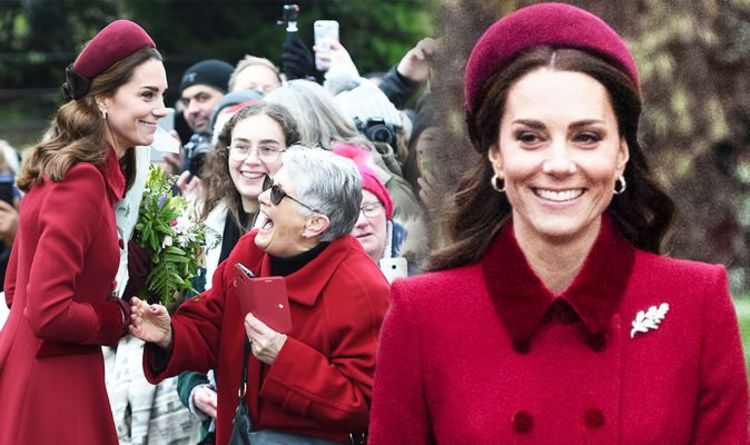 Kate Middleton is the wife of Prince William, 38, and a senior working royal. In this role she regularly joins other members of the family at official events.

Sharing pictures from the exchange on Twitter, a social media user wrote: “I’ve always wanted to know what this lady said to Catherine.”

The picture showed Kate looking into the distance with a slightly embarrassed smile on her face while speaking to one woman.

Body language expert Judi James commented on the exchange to suggest the topic of their conversation was a humorous one.

Speaking to Express.co.uk, she stated: “Kate isn’t known for her comedy facial expressions, which is why this dimpled mouth-clamp is so cute.

“We’ll have to guess exactly what prompted it but overall it looks like an expression of mock-embarrassment and it is totally complimentary to the open-mouth, ‘prompting’ laugh and eye-gaze of the woman she is talking to.

“Their body language does provide some clues about their conversation. Kate is still leaning into towards the woman, showing she’s sharing the fun rather than reeling back in genuine embarrassment.

“Her smile is a self-effacing one, with the lips pulled inward, and her eye-gaze is directed away from the woman, either towards William or just averted to a reflective space.”

The body language of both women suggested something has been said to make Kate show playful embarrassment, Judi continued.

She added: “We’ve all become a bit befuddled during lockdown and many of us can be frequently heard joking about memory lapses.

“The royals tend to remember regular fans who turn up at events like this and they often know them by name. Did Kate drop the wrong name here?

“It could account for the fact that the woman’s hand-tap could be a method of gently telling her off here, although only in a joking way, of course.”

The royal line of succession – who outranks who?

The line of succession to the British throne dictates the order in which each member of the Royal Family would ascend to the throne.

It is also seen as a ranking of importance with the head of the line, the Queen, taking the place of ruler.

Older children come before younger children. Traditionally boys came before girls, but this law was changed on 26 March 2015 before the birth of Prince William’s first child.

Incredibly, Catholics are still excluded from the line of succession, as are children born outside of wedlock.

The royals, who usually stick to a strict protocol when appearing in public, often arrive at events in ascending order of importance, with the most important royal arriving last.

Prince Charles, 72, is currently first-in-line to the British throne, followed by Prince William, 38, his oldest son.

Then comes Prince William’s children, George, seven, Charlotte, five, and Louis, two, and they are followed by Prince Harry, 36. Prince Harry is succeeded by his son Archie Harrison, born in May 2019.