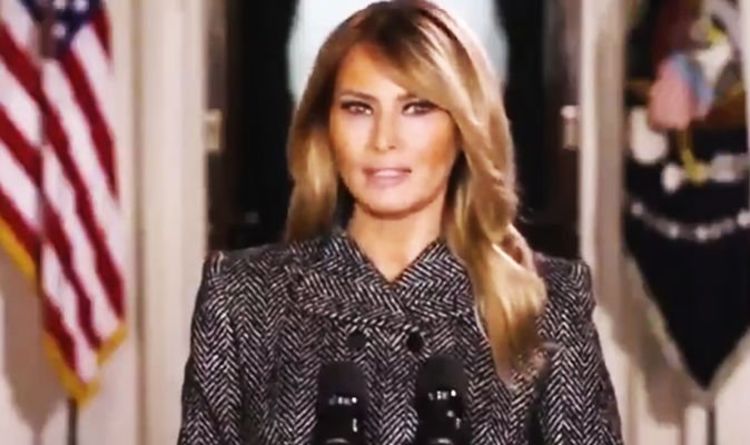 Melania Trump, 50, has been First Lady of the United States for four years and in that time, has given many speeches. For her farewell speech, the former model spoke about her time in the White House as she prepares to leave with Donald Trump.

“Melania by stark comparison is stoic, reserved, and disciplined in her delivery. The words are passionate, but the performance is stiff.  She appears dutiful and solemn, barely flinching in front of the camera, occasionally narrowing her eyes to stress a phrase of importance.”

In the clip, the First Lady delivers her speech at a slow and steady pace with the expert adding she uses pauses to ensure not a single point of her message is missed.

Susie added: “She discusses the achievements she is proud of in her role as First Lady, but with such little emotion on show it is impossible to tell how she feels about these, with only the slightest indication of a smile occasionally creeping in.

“However, what we do know about Melania as a speaker is that this tends to be her style: she does not deploy gesticulation, she rarely uses facial expressions, and does not ever break from the teleprompter or autocue, staring down the camera lens like the barrel of a loaded gun.”

Although the expert says her voice sounds sincere and her pacing is consistent, she explained that it is also “monotonous”.

The expert added: “Never speeding up to show excitement or slowing down to increase impact. In direct contrast to her husband, Melania almost never lets an audience know what she is thinking, preferring to keep her cards close to her chest.

“In a speech used to say her last goodbye to her position, we can only go on the words she gives us to analyse her feelings about her departure; a particularly difficult exercise as she describes the privilege of the role to have been such a deep honour to her ‘no words can express’ her gratitude for it.”

Another voice expert told Express.co.uk that Melania’s farewell speech was a “magical whitewash of the Trump years in office”.

Jon Briggs, best known as the British voice used by Apple Inc.’s Siri virtual assistant software explained: “Melania’s Trump’s farewell speech was a magical whitewash of the Trump years in office from even the most ardent Republican’s point of view. Full of words such as ‘kindness’ and ‘courage’, ‘humbled’ and ‘moved’ which are in complete contrast to the actions we have seen taken by Trump supporters in Washington in the past week.

“It is of course in complete contrast to the highly scripted, autocue read offered by Donald Trump himself just five days ago. Melania at least believes what she is reading, whereas Donald’s video – forced it would appear almost at gunpoint to condemn the violence – in an attempt to save a second impeachment. He looks deeply uncomfortable whereas Melania looks far more serene.”

Jon added that Melania’s accent can impact the message she is trying to deliver.

He said: “While the message she is offering of love and harmony, thanking nurses and caregivers is  wholesome and welcome – there are many – especially in an America that is deeply divided about outsiders – that will take exception to  someone so clearly not from their own country telling them how to behave.

“Melania’s other problem relates to her speech to the Republican party convention in 2016 when she copied almost word for word a speech given by Michelle Obama in 2008. Had the original not been given by such a prominent  and much loved orator, she might have just got away with it – but it was akin to a student finding an essay by their own teacher online and copying and pasting it as their homework.

“Once again, knowing that she has been choreographed in such a way doesn’t help her deliver her message effectively – we are aware of reasons not to believe her before we listen to the words she is using. Our natural cynicism is aroused before we applaud her intent.

“Melania’s speech is removed from the reality of Washington as it stands right now in the same way that she has been removed from the Trump presidency for the last four years – appearing on occasions as a delicate ornament to the rough and tumble of her husband and rarely alongside him when he was doing the one thing he clearly knows how to do which is stir up an audience to fever pitch.

“But who knows – her absence may yet prove to work in her favour – this statesmanlike farewell speech could herald the start of her own campaign. If Mr Trump is denied the chance to run for office again – could it be Vote Melania in 2024?”