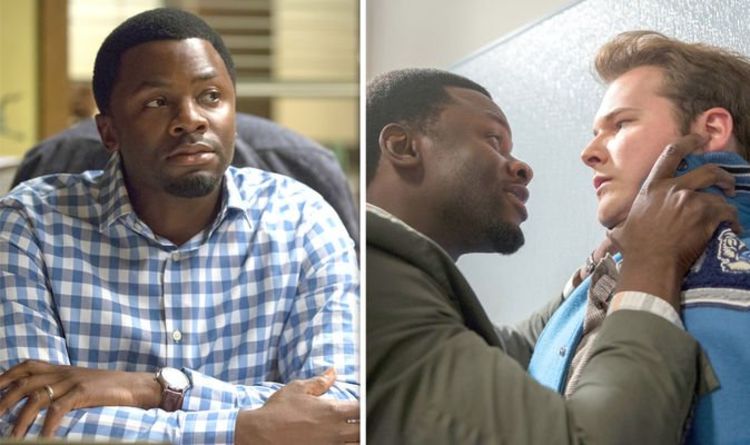 Netflix will be releasing 13 Reasons Why season three on Friday, August 23 with 13 new instalments. Season three of the teen drama will be focusing on a murder mystery and trying to find out who killed Bryce Walker (played by Justin Prentice). There have been lots of theories floating about and one potential suspect is Liberty High counsellor Kevin Porter (Derek Luke).

WARNING: This article contains spoilers from 13 Reasons Why season 1 & 2

Mr Porter was racked with guilt after discovering he was one of the reasons that Hannah Baker (Katherine Langford) took her own life.

Before she killed herself, Hannah went to see Mr Porter in one last attempt to speak about the sexual assault she’s suffered at the hands of Bryce.

However, Mr Porter seemed to brush her off and so Hannah felt alone and unable to deal with her pain any longer.

In season two, Mr Porter took a more proactive approach to looking after the students of the high school to ensure a tragedy like Hannah’s death never occurred again.

He was also seen getting angry at Bryce and even physically assaulting him.

Mr Porter told Bryce to stay away from Jessica Davis (Alisha Boe) and was quite aggressive towards the student.

Sadly though, Mr Porter eventually left the school and was replaced by a new counsellor Priya Singh (Parminder Nagra).

However, could Mr Porter have come back to take revenge on Bryce after still feeling guilt-ridden?

Mr Porter clearly cares about the students and even tried to help Justin Foley (Brandon Flynn) deal with his troubling home life.

Season two saw Mr Porter also breaking down on the stand after he was asked to testify about Hannah’s death.

The counsellor was an emotional wreck as he apologised to Hannah’s parents for what he perceived as his part in her death.

Speaking about shooting on season two, star Derek Luke explained to previously Vulture: “I called a couple acting friends — which I haven’t done since I started my career — because I didn’t want to get it wrong.

“I wanted them to debate me, debate the script, debate my take on it. I needed to debate Mr. Porter.

“That was my process. Because I wanted to be emotionally free, free from technique, and present on the stand.”

The actor even checked into a hotel for a couple of days to distance himself from his family in order to prepare for the emotional scenes.

Mr Porter’s guilt was underscored by a poignant scene in season two when the counsellor spoke to Hannah from beyond the grave.

Reflecting on those scenes, he explained: “The first season, obviously, I’m getting to know her and there’s a lot of similarities that are true for the characters that are also true for the cast.

“But in the second season, all I can say is there was just a very honest vulnerability that affected both of us.

“I appreciate Katherine as an actress being present. It doesn’t matter whether she’s young or older, she was so giving. It made the scene even more powerful.

“She’s so truthful. A lot of the times when I would watch her do scenes, it seems so effortless. I applaud her for that.”

For confidential support call the Samaritans in the UK on 116 123 or visit a local Samaritans branch.