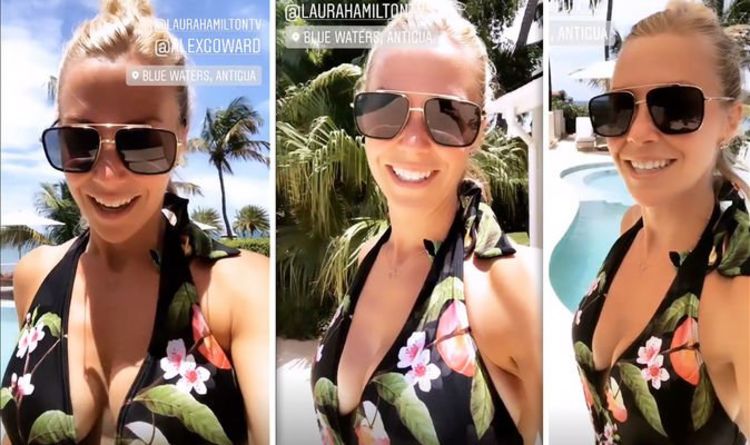 A Place In The Sun favourite Laura Hamilton, 37, left little to the imagination as she paraded her gym-honed figure in a low-cut swimsuit yesterday. The presenter showed off her assets in a floral patterned one-piece with a neckline slashed to below her bust as she enjoyed some time off from filming the Channel 4 property show. The blonde bombshell shared several glimpses at her jaw-dropping poolside ensemble with her 55,000 Instagram followers as she revealed she was in fact staying in the same place Prince Harry, 34, and Meghan Markle, 37, had in Antigua. One snap showed her perching her sunglasses on the top of her nose, gazing over the top of them to shoot the camera a sultry smile as she flashed her cleavage in the racy attire.

A second saw Laura perching on the side of the pool, her sensational figure impossible to miss.

She wore her golden tresses pulled back from her face in a messy bun as she topped up her tan at the Blue Waters resort in Antigua, where Meghan and Prince Harry are known to have stayed in the past.

“Feeling like a princess for a few days and staying where Prince Harry and Megan(sic) stayed!” she captioned the uploads.

The A Place In The Sun presenter also uploaded a video to her story in which she gave her Instagram followers a tour around her resort.

“I feel like I’m staying somewhere like a luxury property on A Place In The Sun this week,” she said.

“We’re staying somewhere where the royals have stayed. It’s quite special.”

Laura panned the camera around to take in the luxurious garden, with the beach visible in the background, saying: “This is the pool just here, and this is the house behind.

“I’m actually having a little break from filming this week and relaxing in the sunshine,” she explained.

Laura has been part of the presenting team on A Place In The Sun since 2012.

She hosts the glamorous property show alongside Jasmine Harman, 43, and Jonnie Irwin, 45.

Recently, Laura Hamilton revealed her “awful” health condition as she opened up about living with Irritable Bowel Syndrome (IBS).

“After having children it’s definitely eased up. I don’t know if that’s because I’ve changed my diet a bit and I don’t eat bread.”

IBS is a common condition affecting the digestive system which causes symptoms including stomach cramps, bloating, diarrhoea and constipation.

According to the NHS, it is usually a lifelong issue which can be helped by changes to diet and through medication.

A Place In The Sun airs weekdays at 3pm on Channel 4.