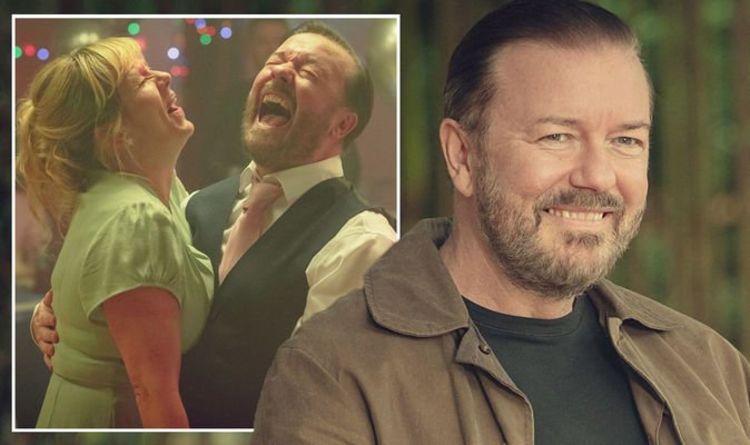 The third season of After Life will bring Tony (played by Ricky Gervais) back to screens across the globe as he continues to deal with the grief of losing wife Lisa (Kerry Godliman) alongside his array of quirky cohorts. And with almost 18 months passing since After Life fans were treated to new episodes on Netflix, the release date of season three has long been at the forefront of viewers’ minds. Now, creator and Golden Globe winner Gervais has shed new light on when the third series will arrive – admitting he “doubts” 2021 is possible.

The first season of After Life dropped on Netflix way back on March 8, 2019, as streamers were introduced to Tony for the very first time in six hilarious yet tear-jerking episodes.

A little over a year later, on April 24, 2020, Tony, Postman Pat (Joe Wilkinson), Kath (Diane Morgan), Sandy (Mandeep Dhillon) and the rest of the After Life crew returned for season two.

The second season ended with Tony at a devastating crossroads, just moments away from trying to take his own life before nurse Emma (Ashley Jensen) knocked on his door to provide him with hope for the future.

The gut-wrenching ending teed up an intriguing third season as fans eagerly await to see what the future holds for Emma and Tony but Gervais has admitted in an exchange on Twitter that 2022 will likely be when it’ll play out on-screen.

“But we need it …..” one upset fan replied while a second suggested: “Not even for Xmas? Perfect Xmas viewing if it’s as good as the previous 2 series.”

A third echoed: “Can you not just throw a strop and make them release it for Christmas….. Try the do you know who I am.”

While the release update may not be the news fans had hoped for, Gervais did provide a more upbeat bombshell about one of the show’s favourite characters recently – Brandy the dog.