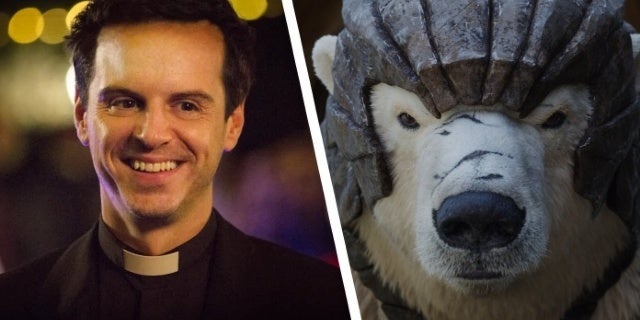 HBO and BBC’s His Dark Materials has found its latest star. According to a new report from Deadline, Sherlock alum Andrew Scott has signed on to appear in the second season of the upcoming drama series, ahead of Season 1 airing later this year. Scott most recently played the “hot priest” on Season 2 of Fleabag, and previously played Moriarty on BBC’s Sherlock.

Scott will be playing Colonel John Parry, the father of Will Parry (Amir Wilson). Parry, who is also known as Doctor Stanislaus Grumman or Jopari, accidentally travelled to Lyra’s world where he became a renowned scholar and shaman. His dæmon was called Sayan Kötör and had the form of an osprey.

His Dark Materials is set in a pretty unique alternate reality, in which humans go through life alongside a daemon, a physical manifestation of the human soul. The series follows a young orphan named Lyra, who discovers a dangerous secret that leads her down a mysterious rabbit hole.

“We’re not twisting it, but we are modernizing it a little bit, making it feel a little bit more accessible.” director Otto Bathurst told Metro UK last year. “The books are quite Victoriana in their fantasy, but it’s pretty on the nose – there are a lot of fans of that book and it’s a great book so why mess with it?”

The description of the series can be found below:

“Adapting Philip Pullman’s award-winning trilogy of the same name, which is considered a modern masterpiece of imaginative fiction, the first season follows Lyra, a seemingly ordinary but brave young woman from another world. Her search for a kidnapped friend uncovers a sinister plot involving stolen children, and becomes a quest to understand a mysterious phenomenon called Dust. As she journeys through the worlds, including our own, Lyra meets Will, a determined and courageous boy. Together, they encounter extraordinary beings and dangerous secrets, with the fate of both the living — and the dead — in their hands.”

What do you think of Scott joining His Dark Materials? Share your thoughts with us in the comments below!

His Dark Materials is set to be released on HBO later this year.