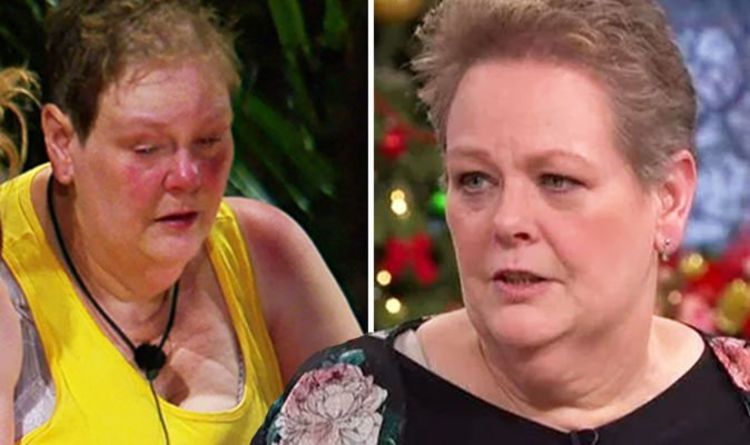 Anne Hegerty, 61, won over the nation when she appeared on last year’s series of I’m A Celebrity…Get Me Out Of Here! but is best known for putting contestants through their paces on the ITV show The Chase. The Governess has now opened up about her life before her rise to fame where she admitted it was not smooth sailing. Anne revealed before her major TV break, the quizmaster said she struggled with debt and was so broke, she had to rely on using vouchers to buy basic food. Speaking to The Sun on Sunday, the ITV favourite admitted to “struggling and being hungry” as a freelance editor with very little work.

She told the publication: “I was struggling, I was hungry, I was a freelance copy editor but had very little work.

“I had to go to Asda, it’s the best supermarket if you’re poor as they have a good basic range, Sainsbury’s is for rich, posh people.

“I would take vouchers, do sums in my head just to get some eggs and bread or a tin of cheap Irish stew. I’d be starving and want two tins but couldn’t afford it. The poorer you are the hungrier you feel.”

The Chase star recalled one of her “worst moments” when she attended the Mastermind Club society event in Manchester.

Anne who appeared on the quiz show in the late 80s, said she spent her night alone in the pub in tears because she couldn’t afford to buy a drink.

She said: “I didn’t have money to buy a drink and nobody offered. I spent the entire evening at this table at the back of the pub alone, with tears rolling down my cheeks, thinking, ‘Will someone just buy me a f***ing drink, please?’

“It was dreadful. I don’t know where I’d be without The Chase, it changed my life.”

Fortunately, the quizmaster got her television start on the ITV series in 2010 and was able to significantly change her lifestyle.

She said she was able to pay off her mortgage and her debts.

Speaking about her relationship with money, Anne explained: “I love having lots of money, I think it’s brilliant.

“There are very few problems that money can’t solve.”

Elsewhere, the quizmaster who was diagnosed with Asperger syndrome at the age of 45, recently took to Twitter to respond to a fan about her level of expertise on the issue.

The Twitter user wrote: ““@anne_hegerty Hi Anne, can I DM you as you have helped me potentially diagnose myself and I’d like to talk?”

However, the quizzer was quick to insist she is not an “expert” on the subject.

She wrote back in view of her 126,000 followers: “I’m honestly not the expert everyone thinks I am.”

Anne then added in reference to the National Autistic Society charity: “Could you talk to the NAS?”

To which the social media user replied: “Will do. Thanks for bringing the condition to my attention though on I’m A Celeb.”

Anne openly spoke about her experience with the form of autism while she was a contestant I’m A Celebrity…Get Me Out Of Here!