Antiques Roadshow got underway at Helmingham Hall this evening, with a whole manners of relics given valuations by the experts on hand.

One such expert was Joanna Hardy, who was joined by a guest who had brought along their prized yellow sapphire ring onto the BBC show.

As Joanna gazed upon the eye-popping piece of jewellery, she was in awe of the ring’s glowing yellow colour.

Making her valuation of the beloved item, Joanna left the guest speechless as they weren’t quite expecting the amount the expert had stated.

My eyes just popped out

Joanna began her analysis by saying: “My eyes just popped out when I saw this because when I see quality, when I see a good gem stone, I fall instantly in love.”

Explaining how she’d got her hands on the piece, the guest told Joanna: “I went to a shop where my son had just begun working in the late eighties and I thought, ‘I’ve got a little bit of money put by and I’m going to treat myself.’

“I’ve loved it ever since and whenever I wear it, it’s always going to be a good day, a lovely day,” she remarked.

The expert then added: “That’s what gem stones are all about.

“It’s about the colour speaking to you and this is a magnificent colour for a yellow sapphire.

“We always think of sapphires being blue, but they can be all colours as we’ve mentioned many times before on the programme. 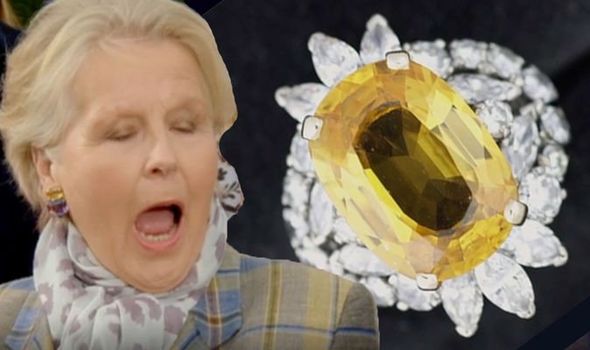 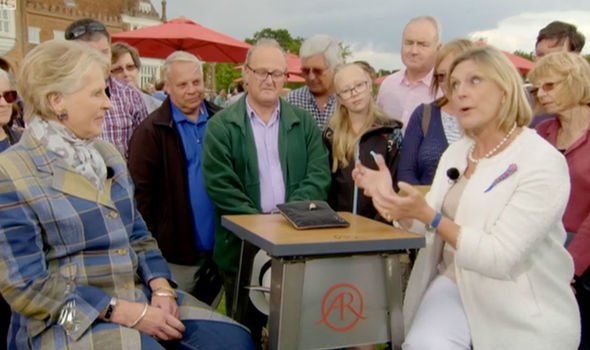 “But I have never seen a yellow sapphire which is natal because you say you have a certificate saying that’s it’s natural, it hasn’t been heated in any way.”

“This is how nature intended it to be,” Joanna continued.

Giving a more in-depth analysis, the expert said: “For me, it is the best yellow sapphire I have seen on the show ever and it weighs about seven and a half carats.

“It’s made in 18 carat white gold but it is made by E Wolfe and Co.

“They started in 1850 and they still have a workshop with apprentices today and they have made some stunning tiaras which a lot of the Royal Family have worn.

“This is a much later ring but it’s just superb,” Joanna concluded of examination of the rare sapphire ring.

Turning her attention to money, Jonna told the guest: “At auction, you would be looking in the region of about £15-20,000.”

Stumped by what the expert had just said, the guest asked after a being initially speechless: “At auction? Ouch!”

Joanna continued: “These stones, people are looking for quality and rarity.

“That is what’s really key now in the market that we’re seeing,” the expert added, with the guest thanking Joanna for her staggering valuation.

Antiques Roadshow airs Sundays at 8pm on BBC One.