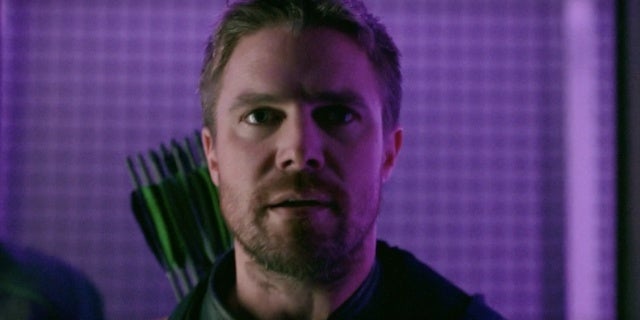 The final season of Arrow will, to paraphrase series star Stephen Amell, see the long-running The CW series play their greatest hits, with some episodes serving as odes to earlier seasons. It’s something some fans think will see the show make visits to the past and now, the title reveal for the fourth episode of Season 8 seems to be bolstering that fan theory, albeit with a nod to the present.

Executive Producer Beth Schwartz took to social media on Monday to share a photo of the title page for Arrow episode #804 revealing it to be “Present Tense”. You can check out the photo below.

It is, admittedly, a fairly vague reveal but there are a few things it could be referring to. First is the idea of Arrow‘s final season taking place in various times (and, possibly, worlds) within the multiverse. Behind-the-scenes photos Amell has shared previously revealed the Queen Mansion will be making an appearance in Season 8. That is of particular interest as Queen Mansion burned down sometime between seasons two and three, an event that happened off-screen but was documented in the tie-in comics where it was revealed that Church of Blood member Caleb Green went after Oliver, with Queen Mansion burning down in the process.

It could also be a reference to an episode that will not have some fashion of flash forward. One of the major elements of Season 7 was a storyline that played out in the future, following Oliver and Felicity’s (Emily Bett Rickards) daughter Mia (Katherine McNamara) as well as son, William (Ben Lewis) trying to save a future Star City. Both McNamara and Lewis have been promoted to series regulars for the final season, indicative that “future Team Arrow” will continue to have a role. With a title like “Present Tense”, it seems that perhaps the episode will keep things in the “main” timeline, though at this point anything is speculation.

What is for certain is that there’s a lot riding on the final episodes of Arrow, now that Oliver has learned of his impending death in the “Crisis on Infinite Earths” crossover. Now that Oliver is well aware of his fate – and was tasked by The Monitor (LaMonica Garrett) to help stop the coming “Crisis”, it sounds like the show could be taking some narrative risks — and possibly include some interesting character returns.