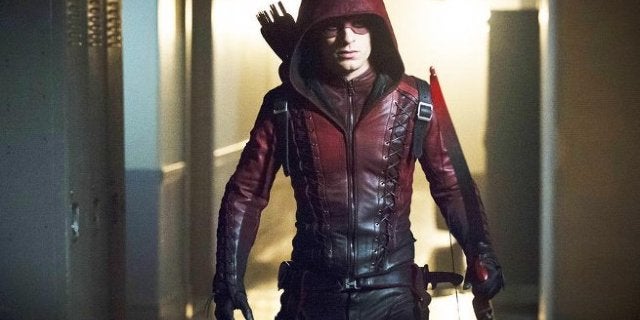 Arrow season eight looks like it will come and go without an appearance from actor Colton Hayes. The actor who played Roy Harper in the series just posted on Instagram to further open up about his struggles with addiction. It appears that Hayes is truly focused on getting better and healing in the wake of some problems with substance abuse in the last few years.

Hayes uploaded a few pictures on the social media platform to give his fans a bit of an update on where he is at with his recovery from dependency. The images are jarring as he is pictured in a paper hospital gown frequently and connected to various machines at different times. Hayes also showcased some bruising on his back and a long caption that talks about not projecting a fake image any longer.

The former series regular had recently just clued fans in on why he wouldn’t be present in the upcoming eighth season of Arrow. Hayes took to social media recently to clear the air for the reasons around his departure. Fans previously believed that he had personally chosen to sit out the final season, but he said the truth was that he wasn’t asked to return.

Arrow executive producer Beth Schwartz told Green Arrow TV about the change in Haynes status on the show directly during the recent TCA press tour. She said, “We hope to have him back. We love him and he’s obviously one of the foundations of the show.” This moment led the actor to say his piece on Twitter after being overrun with negative comments.

Haynes had previously left the door open to the possibility of being available for a return. It looks like there are some more important things on the table for the actor after the revelations in that Instagram post. Fans wanted some closure with Roy, and now they have more than enough information to let this one go.

Troubles seemed to follow Haynes as he made a full-time return to Arrow in season 7; the actor’s marriage has hit several snags (out in public view), and to make matters worse, he lost his mother in spring of last year. This spring, Haynes had already opened up more regarding his struggles with substances. He revealed that he had abused both alcohol and pills virtually daily over the past decade.

There hasn’t been any mention of any trouble with Haynes on the Arrow set, but it would be understandable if the actor needed to take more time to do whatever he needs to for himself. We sincerely wish him the best.