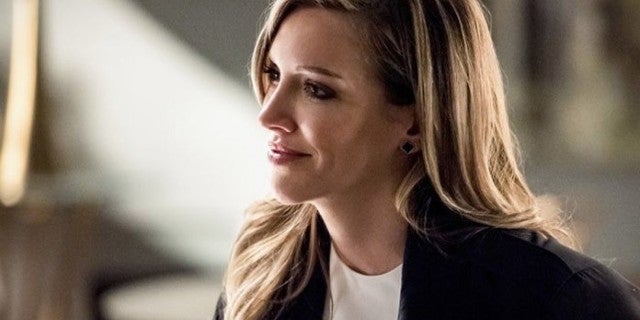 Katie Cassidy Rodgers became the latest Arrowverse star to step behind the camera to direct, making her directorial debut with the third episode of Arrow‘s upcoming eighth and final season. Now that the episode has finished filming, series star Stephen Amell is taking time to reflect on filming “Leap of Faith” and has nothing but praise for Cassidy Rodgers’ time as director.

In a recent video post to Instagram, Amell marked the completion of the third episode and took a moment to praise Rodgers, telling fans the Laurel Lance actress did a “really, really lovely job”.

“I would really like to congratulate Katie,” Amell said. “This was her first episode directing and she did a really, really lovely job. She doesn’t like to do a lot of takes, which I like. In general, I’m sure it can be really intimidating but she gave a lot to the actors and was really positive and frankly, put me in a position where I wanted to deliver a good performance for her… She’ll direct again! She was really great.”

Cassidy Rodgers first revealed that she would be making her directorial debut on Arrow during last month’s San Diego Comic-Con making her the latest Arrowverse actress to direct. The Flash’s Danielle Panabaker made her directorial debut on The Flash last season and is directing an episode for that series’ Season 6 while Supergirl‘s Melissa Benoist and DC’s Legends of Tomorrow‘s Caity Lotz are set to direct on their respective series as well.

“Throughout the years I always have wanted to, and I just started shadowing more and shadowing more, and I recently did the Warner Bros. directors’ program, which was incredible,” Cassidy Rodgers revealed last month. “It’s going to be fun. I can’t wait to direct all you!”

Cassidy Rodgers’ episode of Arrow has a bit of added significance in terms of its placement in Arrow‘s final season as it is part of the lead up to Arrow’s role in “Crisis on Infinite Earths”. With the season reportedly paying homage to various key moments in Arrow‘s history — Amell has previously noted that episode 1 is an ode to Season 1 while episode 2 is an ode to Season 3 — it will be interesting to see where the episode falls.

Are you excited for Cassidy Rodgers’ directorial debut on Arrow this fall? Let us know in the comments below.