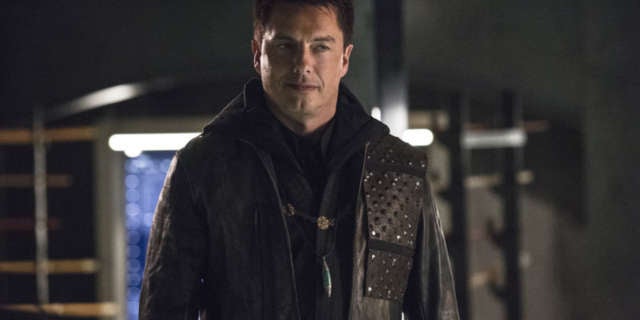 An ever-growing number of familiar faces are set to return in Arrow‘s final season — including the show’s first Big Bad, Malcolm Merlyn (John Barrowman). After series star Stephen Amell let it slip during a convention last weekend that Barrowman would be returning, the actor took to Instagram to share a photo of his chair on the show’s set. In the caption, he revealed that he loves working with the show’s team and that fans will have to watch to find out what happens to Merlyn.

Given the circumstances around Merlyn’s last official appearance on Arrow – when he died offscreen from a land mine in the show’s Season 5 finale – the notion of Barrowman being vague certainly make sense. Since Merlyn’s death didn’t happen onscreen, many had speculated that the villain was still alive in some form or fashion. In the years since that’s never really been confirmed or denied, and Barrowman has since appeared in last year’s “Elseworlds” crossover as a police officer in an alternate timeline.

“We told John when we called him to tell him about the events of the finale, every single person on all the shows has come back in some shape or form.” Arrow consulting producer Marc Guggenheim told reporters back in 2017. “We’ve got flashbacks, we’ve got time travel, we’ve got parallel universes. Goodbye is never goodbye. He has an open invitation to return to the show any time he wants.”

How Merlyn factors into Arrow‘s final season will certainly be interesting, considering the approach that the last ten episodes will have to homaging its previous seasons.

“The good news is unlike Game of Thrones or unlike Lost, were not burdened with having to answer a question,” consulting producer Marc Guggenheim told ComicBook.com last weekend. “We’re not burdened with ‘who’s going to sit on the Iron Throne?’ or “what was the island?’ so we get to do, I think, a much more character-based ending. So, at the same time, the complication for us is that we also have “Crisis” and I think a lot of the stuff that was always in my head in terms of how to end the show we’re now actually going to end up doing in the crossover instead so it’s like now what does the series finale become? But, you know, we’ve got plans.”

“I’m really excited about it.” Guggenheim continued. “The goal is to make it satisfying for the fans, but the good news for us is we don’t have the challenges that Lost or Game of Thrones had,” he continued. We also don’t have the ratings, so there’s that, too. But I feel the pain of Damon, Benioff, and Weiss. It’s hard. It’s a hard thing to do in a way that satisfies everyone. I also think, because I’ve been thinking how does one end a series, there’s what the initial reaction to something is and then there’s how it stands the test of time and those two things are not always the same.”