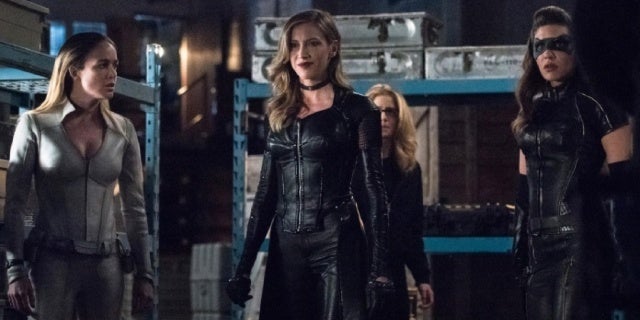 Arrow has introduced elements of Birds of Prey lore across its run on The CW, to the point where fans have spent years clamoring for some sort of spinoff based around the group. As it turns out, one of Arrow‘s stars – Katie Cassidy Rodgers – has apparently advocated for that hypothetical spinoff as well. A new report from Newsarama reveals that Cassidy Rodgers, who has played multiple versions of Laurel Lance/Black Canary across the show’s run, pitched a Birds spinoff to the network.

“I’ve pitched it,” Cassidy Rodgers explained. “I think they should. It’s time for women. Come on, we’ve got this.”

While the network’s initial Birds of Prey show has gained a cult following of sorts since its short-lived run in 2002 and 2003, an official spinoff surrounding Arrow‘s Birds of Prey-related characters has never come to fruition. That being said, the show has done several episodes trying to evoke the spirit of that iconic group. A Season 2 episode called “Birds of Prey” revolved around Laurel, Sara Lance (Caity Lotz), and Huntress (Jessica De Gouw). And last season, an episode called “Lost Canary” saw Sara, Dinah Drake (Juliana Harkavy), and Felicity Smoak (Emily Bett Rickards) teaming up to convince Laurel she could still become a hero.

Of course, the fact that Warner Bros. is adapting the Birds of Prey onto the big screen might throw a wrench in a potential CW show, as Birds of Prey (And the Fantabulous Emancipation of One Harley Quinn) is set to hit theaters next February. Early rumors have indicated that if the Birds of Prey film is successful, a trilogy could be in the works, which would theoretically culminate in a faceoff against the Gotham City Sirens. But since DCEU and DCTV characters have existed concurrently in the past, there’s no telling what could happen.

Whether or not a Birds spinoff comes to fruition on The CW, it sounds like Arrow‘s farewell might not theoretically mean the end for the other characters in the show’s ensemble. Given the fact that Arrow already has four spinoffs on the network – The Flash, Supergirl, Legends of Tomorrow, and Batwoman – as well as a slew of animated shows on CW Seed – there’s certainly no shortage of potential places for the show’s characters to cameo.

“There’s always a chance.” consulting producer Marc Guggenheim explained to ComicBook.com last month. “Especially since this has now become this huge universe. We have all these different places we can go, different ways we can tell stories. And the thing I always – and I’ve been saying this for a few years now, because it’s been a universe for a few years now – whenever an actor leaves the show, I always say ‘It’s not goodbye, it’s see you later.’ Because we have all these different avenues available to us, between time travel and parallel universes and animated — you name it, we’ve got all these different avenues, which is a nice thing to be able to explore.”

Do you want to see a Birds of Prey spinoff on The CW? Share your thoughts with us in the comments below!