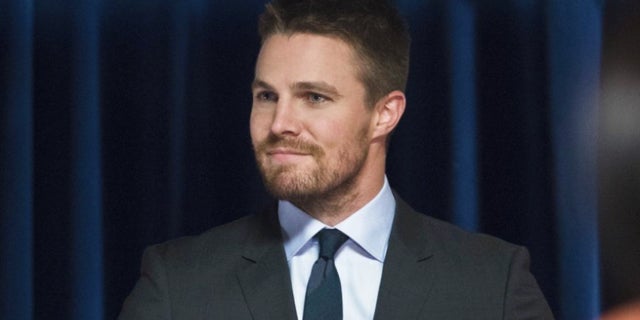 When any television series ends it’s a natural for fans to wonder what’s next for stars who brought favorite characters to life. For Arrow fans, this is especially true. After seeing Stephen Amell play Oliver Queen/Green Arrow for seven years, there’s an eagerness to know where the actor will go after The CW series’ eighth and final season this fall and now fans know that Amell’s next project will keep him on the small screen, even if the details as to what that project is remain under wraps.

During his panel at Fan Expo Boston on Saturday, a fan asked Amell what he would be doing professionally after Arrow ends. The answer turns out to be another television project, one that Amell is excited about even if he can’t talk much about it just yet.

“I’ve recently closed on a new project that I’m really excited about that I am not allowed to talk about. It’s on TV,” Amell said. “I thought that the news was going to break last night, and I was kind of excited to talk about it today, but it’s for me… next question, next question. But something. Something very soon.”

While fans wait for that “very soon” to happen so the official announcement of whatever Amell’s new project is happens, speculation is inevitable and much of it may swing towards other comic book characters. Over the years, Amell has repeatedly been asked what other DC characters or Marvel characters he might want to play should the opportunity present itself. Earlier this year at MCM London Comic Con, Amell said that if he were to play another DC character, he’d want to play a villain largely because he likes villains.

“Part of the fun for me with acting is identifying a job, be it Arrow or any job that came before it for me, and really buckling down and trying to get it,” Amell said. “I don’t know what that job is but I’m excited. If I’m gonna play a DC character again it has to be a villain because I like villains. Favorite villain? General Zod.”

Whatever Amell’s next television project, fans still have the final season of Arrow in which to say goodbye to his Oliver Queen. While Amell admitted in a recent Facebook Live that he initially thought that the show would end with Season 7, he’s happy to return for the last 10 episodes as well as to participate in the upcoming Crisis on Infinite Earths crossover.

“I think that we’ve had our running time,” Amell said. “That’s what I thought when I talked with Greg Berlanti in Season 6. I felt like we had done our thing. I thought ultimately theoretically Season 7 should’ve ended things. But to come back and do 10 episodes … what they’ve done with this final season is really cool. It’s like nothing you guys have ever seen. Every episode that comes out, it’s like ‘Wait a minute, what? It’s happening what and where and how? Ok, that’s cool. Let’s do it!'”

Arrow returns for its eighth and final season on Tuesday, October 15th at 9 p.m. ET on The CW. “Crisis on Infinite Earths” comes to the Arrowverse this December.