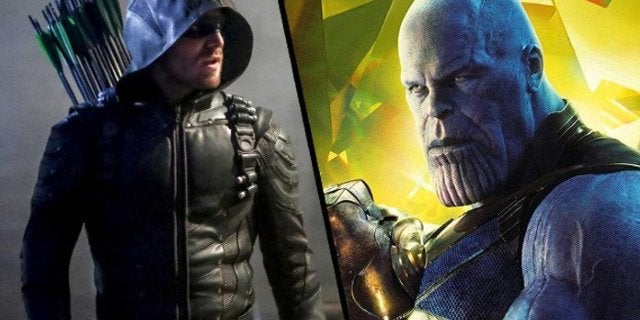 Arrow is coming to an end this fall and series star Stephen Amell is working on his final episodes as Oliver Queen. Fans are taking the chance to ask him all sorts of questions before their time with the character is over. One very brave fan at Fan Expo Boston asked the actor which Marvel Comics he would portray if he got the chance to leap onto the silver screen.

For his part, Amell is very calm, but absolutely suspicious of the crowd’s very polite questions. He answers “Thanos” in dead seriousness and the inside of the room rocks with laughter because of the thought of the hero playing such a villain. He reiterated, “People think I’m kidding, I’m not kidding.” Still, the crowd seemed less than convinced and the other questions kept on coming from other members of the audience.

This summer has been full of reflection for Amell and his Arrow co-stars. Many of them have looked back on the series as a whole. The leading man even revealed his favorite episode of the entire series at the Television Critics Association Press Tour. His choice is one that goes back to the early years of The CW series.

During that presentation, Amell disclosed that his favorite episode of Arrow is episode 20 of season 2, entitled “Seeing Red”. The episode was written by Wendy Mericle and current show runner Beth Schwartz. Amell found that one particularly beautiful for how it showcased the Queen family. “That was a really beautiful episode,” Amell said.

Fans of Arrow may remember, “Seeing Red” saw some deeply touching moments between Oliver and his mother, Moira (Susanna Thompson), both in flashback and in the show’s then-present day. In flashback, Oliver reveals to Moira that he got a woman pregnant that isn’t his then-girlfriend Laurel with Moira telling her son that they’ll figure it out and we later see her paying off the girl to tell Oliver that she lost the baby. Then, in the present, Oliver tries to talk his mother out of dropping out of the mayoral race, with Moira revealing to Oliver that she’s aware that he’s the Arrow and she couldn’t be more proud of him.

For all those touching moments between the family, there is one last one that is among the most heartbreaking of the series. Slade Wilson/Deathstroke (Manu Bennett) captures the Queen family and makes Oliver choose between his mother and his sister, Thea (Willa Holland). Ultimately, Moira offers her own life so as to spare her children and Slade runs her through with his sword while both Oliver and Thea watch.

That heartbreaking end of Moira Queen’s story is a big reason why the recent announcement that Thompson will return to reprise the role in the show’s final season has fans very interested. It’s not exactly clear the context in which we’ll be seeing Moira Queen again — flashback, alternate earth, or even hallucination on Oliver’s part are all real possibilities — but what is clear is that the final season of Arrow is one that executive producer Marc Guggenheim has previously described as a “love letter” to the show.

“It’s a love letter to the show; it really is,” Arrow executive producer and “Crisis on Infinite Earths” showrunner Marc Guggenheim told Green Arrow TV. “I was telling Beth [Schwartz], it felt a lot like the series finale, not the season premiere, in the best possible way, almost to the point where we’re like ‘what are we going to do for the series finale?’ I mean, we know, obviously, but it has that kind of resonance to it, and that’s exciting.”

Arrow‘s eighth and final season will premiere on Tuesday, October 15, 2019 on The CW.