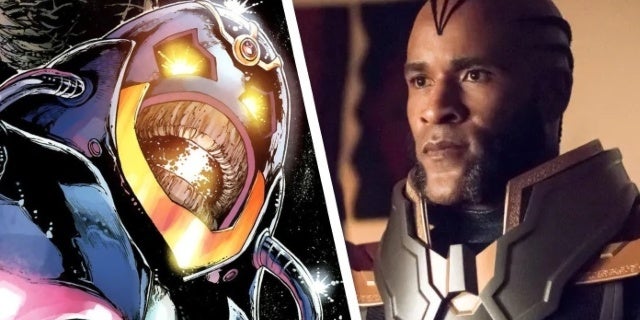 The Arrowverse has pushed full steam forward this season as all the exhibits on The CW rumble towards Crisis on Infinite Earths. LaMonica Garrett is each The Monitor and the Anti-Monitor in the upcoming crossover occasion, and followers simply received handled to a particular have a look at what it’s been like for the actor behind-the-scenes. Garrett posted a reasonably humorous picture of himself on the set a monitor. His caption about “hating this Monitor” is fairly super, and Garrett is clearly having fun with his Arrowverse expertise a ton this season. As followers are already conscious, the Crisis is coming in only a few brief weeks and nothing would be the identical going ahead. Pulling double responsibility in these exhibits isn’t any straightforward job. Plenty of Arrowverse veterans have needed to in some unspecified time in the future for plot causes, however the degree of bodily transformation between these two characters is intense due to all the consequences and make-up obligatory for the swap.

Comicbook.com talked to Garrett lately in regards to the job in entrance of him in Crisis on Infinite Earths. One factor that completely fell into the dialog was the thought of taking part in these two very distinct characters in the upcoming crossover. Garrett thinks there are some delicate nuances between the 2 and hopes that viewers benefit from the expertise of assembly the Anti-Monitor.

On the Anti-Monitor, “It’s a lot of fun. It’s a lot of work that goes into it, but it’s the fun work that doesn’t feel like work. But yeah, I’m having a great time with both characters, and they’re so uniquely different that it’s just, you know, it’s fun to bring both of them to life,” Garrett mentioned.

Now, which will elevate the query of which position is more difficult. The actor had a solution for that as effectively, “I feel the Monitor as a challenge just because it’s the dialogue, his stillness. Like, sometimes you want to move and you want to, you know, with gesture you want to do different things and he’s just so still in what he does. And that’s a challenge for me, because the actor in me, I’m the opposite of that. So it’s just reminding myself when I am the Monitor. Just, it’s all with what he says, it’s his presence, and it’s in his eyes, and just let everything fall, and that’s a challenge.”

Garrett continued, “Well like with any character, I would start from a base point of you know, what does this person want? And what’s going to happen if he doesn’t get it? And to me that’s the base of any character, any scene. Like that’s what drives the story, and the friction comes in is where your objective as the character coming head-to-head with someone who has a polar opposite objective, and I think that’s where magic is made in film and television. But that’s how I approached both of them, and I get to keep asking questions like, where did he come from? You know, What was he like? What’s his family like? You know, it drives the stakes up. It kind of peeks in through, like things, little unique things that they might do that are different from other characters, because the more questions you ask, the more you know, things reveal themselves. And then finally when you get the script it opens up a whole new world. So I bring what I prepared along with what they wrote and you know, hopefully it works.”