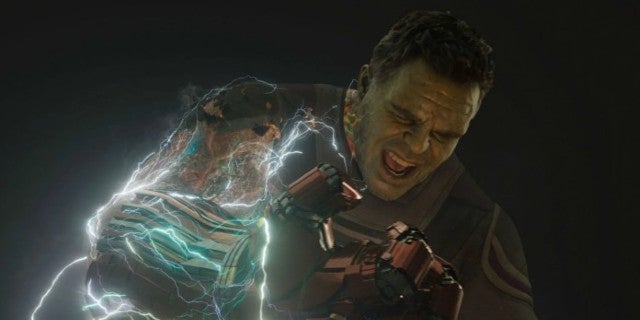 “The Hulk has never come up against every Infinity Stone in a gauntlet, and the pure power of the stones. Thanos is nearly invincible, and he did not heal either,” Joe Russo says in a Twitter Q&A hosted by Wired. “So, clearly, when you wield the full power of the Infinity Stone, it’s irreparable damage to your being.”

Added Anthony Russo, “If it doesn’t even kill you.”

Thanos (Josh Brolin) and the gamma-powered Hulk survived only because of their incredible power; a third snap performed by Iron Man (Robert Downey Jr.) to obliterate Thanos and his army proved fatal for the fully human Tony Stark.

“He’s lost an arm. He lost Natasha. That’s not coming back,” Russo said. “He’s damaged himself. I don’t know. It’s interesting. That’s permanent damage, the same way that it was permanent damage with Thanos. It’s irreversible damage. His arm, if you noticed, is a lot skinnier. It’s blackened. So, he loses a lot of strength there.”

Russo then acknowledged any decision to reverse Hulk’s injury will not be one made by the directing duo: the Russos are currently finished with Marvel Studios and are now concentrating on other projects.

“But who knows? There’s a lot of smart people left. Maybe someone helps him repair that. Maybe someone gives him a new arm. I have no idea where that character goes from here,” Russo admitted. “The nice thing is we didn’t have to pay attention to where it goes after this, we just try to tell a satisfying ending.”

Avengers: Endgame is now available to own on 4K Ultra HD and Blu-ray.