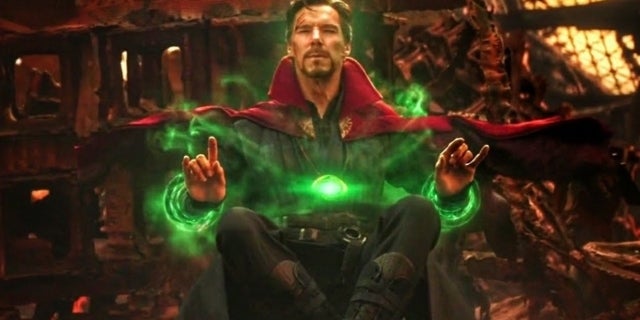 Thanks to Doctor Strange (Benedict Cumerbatch), the Avengers knew just how big of a threat Thanos (Josh Brolin) was during Avengers: Infinity War. The Sorcerer Supreme was able to view nearly all potential futures and out of the 14 million-some alternate futures he traveled through, he only saw one where the good guys won. You know the deal by now, right? Still doing some press work for Avengers: Endgame, directors Joe and Anthony Russo sat down with Wired to answer some leftover burning questions from fans, including a good one about how Strange was able to actually travel through time.

As one might expect, the filmmakers compared the situation to the final third act battle in Doctor Strange, where the Master of the Mystic Arts stuck the Dread Dormmamu in an infinite time loop. It’s been speculated Strange and Dormammu were in that same time loop for thousands of years, allowing the former to perfect his skills in mystic arts and it seems the Russos would confirm as much in their response.

“Strange has to exert an immense amount of energy to go into this state and the amount of time he’s in this state, as we know from his history in his own standalone film Doctor Strange, he can be in the state for who knows how long,” Anthony mentions. “It could have taken Strange an immensely large time to review all these scenarios.

Joe very much echoed the sentiment, explaining that Strange was physically traveling to all 14 million futures. “He has to physically review all of these scenarios and die in them and right before he dies, he has to reset it as we saw at the end of Doctor Strange, and do it again, taking copious notes each time he does it,” Joe says.

If that’s the case, Doctor Strange — who’s a human between 40-50 — has technically lived thousands, if not milliions, of years perfecting his craft, which makes him one of the most formidable heroes in the MCU stable of characters. Now the Time Stone has been reduced to atoms, the question remains — what happens to Doctor Strange and the Masters of the Mystic Arts who were sworn to protect the Eye of Agamotto?

Avengers: Endgame is now available wherever movies are sold. What’s been your favorite Doctor Strange moment yet? Let us know your thoughts in the comments below or by tweeting me at @AdamBarnhardt to chat all things MCU!