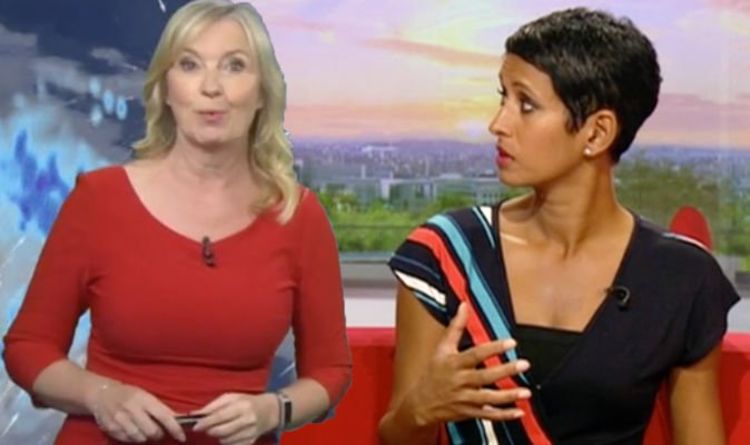 BBC Breakfast returned to BBC One earlier today as Dan Walker was joined by Naga Munchetty to present Tuesday’s instalment of the show.

Throughout the morning, the pair crossed over to meteorologist Carol Kirkwood, who was reporting on the weather from a studio instead of being on location.

During one of her updates, those watching at home saw her speak about the chances of rain some places in the UK might experience over the bank holiday weekend.

But it wasn’t until she had finished and handed over to Naga, when she was told about the response the weather update had received.

“Low pressure in the north, producing some rain and still pretty breezy,” Carol explained in reference to the outlook on Thursday.

“We will see more rain coming in across Northern Ireland and western Scotland generally. But further south we’ve got a lot of dry weather, a bit of cloud and highs up to 23 degrees Celsius.

“Then for Friday, still have the rain, move south, the cloud breaking, the temperature continuing to rise and we’re looking of about highs of 26 degrees Celsius on Friday in the south east,” she continued before concluding: “Dan and Naga.”

“Carol, you’ve been heckled in the studio this morning!” Naga commented. “And it wasn’t me for once! Can you believe it?”

Finding the revelation a big awkward, Carol simply replied: “No.”

“Yes, every time you said ‘more rain’, I’m hearing on the other side of the studio ‘ugh’.” Naga explained.