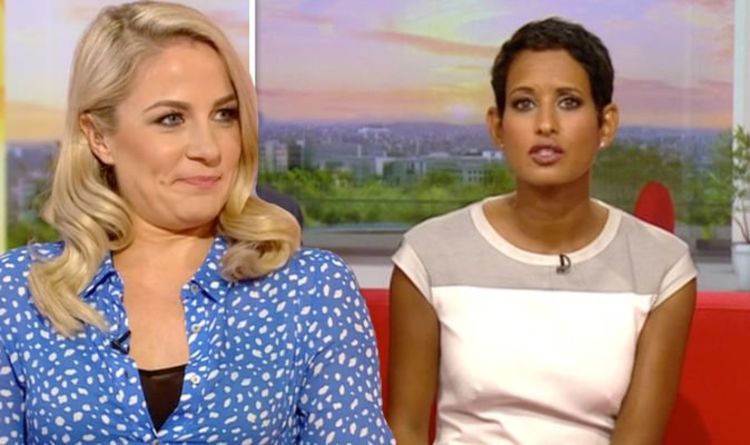 BBC Breakfast followers had been handled to a jovial spat this morning, as hosts Charlie Stayt and Naga Munchetty had been joined by sports activities knowledgeable Holly Hamilton.

Holly arrived on the couch to present particulars on a brand new competitors folks may have by no means heard of – the Olympics for Seniors.

The video games embody relays, archery, darts, and much more – and was solely for outdated aged pensioners.

After Holly reported on the occasion, she took a cheeky swipe at her colleague.

She started by saying: “The competitors continues to be there, isn’t it?

“Imagine us at that some day. We’d be fairly aggressive, wouldn’t we.”

Holly then jokingly hit out at Charlie by suggesting he might swap the BBC Breakfast couch for sports activities, saying he “might enroll”.

As Holly and Naga fell into matches of laughter, Charlie whined: “You know what, I just knew you were heading in that direction. Someone had to say it out loud.”

Fortunately for Charlie, Naga stopped laughing simply lengthy sufficient to defend him, as she jumped in to say: “No, it’s so wrong.”

She then appeared at Holly and introduced: “And you know what, Holly? Shame on you!”

“We’ll by no means signal you as much as that – not at all. Not simply but.”

During the present Dan started explaining: “That’s Jan Socrates, who’s the oldest person on the planet-“

But Louise chimed in: “And I might have spoken to her for ages!”

Dan then started guffawing as he realised what he had stated, and went on to appropriate himself.

He stated: “I haven’t completed that sentence! She’s not the oldest person on the planet.

“Let me get this appropriate! she’s the oldest person on the planet to sail all over the world on her personal unassisted.”

Dan went on so as to add: “That’s an awkward interruption, isn’t it!”

BBC Breakfast continues weekdays at 6am on BBC One.