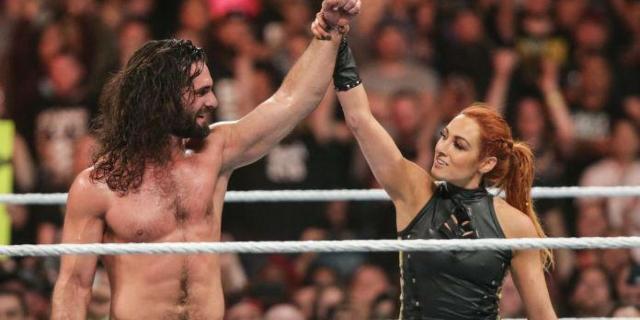 Raw Women’s Champion Becky Lynch and WWE Universal Champion Seth Rollins publicly came out as a couple back in mid-May when Rollins posted a photo of the pair kissing backstage. It didn’t take long until WWE added their real-life relationship into the television product, leading to a match where the pair defended both of their titles against Baron Corbin and Lacey Evans in a mixed tag match at Extreme Rules in mid-July.

While the match wound up being fairly entertaining, fans quickly grew weary of the commentary team consistently mentioning how the pair were dating over and over. Lynch admitted in an interview with BarnBurner Radio leading into SummerSlam that she got sick of it as well, saying that it wound up hurting the storyline.

“The way I look at it is, oh my god, if I was a fan and I saw two of the best, the male and female best fighting together side-by-side I would be into that,” Lynch said. “And if you know we’re in a relationship, then you know. If you know, you know. But of course, it was mentioned every five minutes in case you didn’t know and I think that was a little off-putting. Because people, they don’t want to see ‘The Man’ needing a man. They don’t want to see Seth Rollins needing anybody else, because we’re two powerful entities on our own. And fighting side-by-side like, ‘Ok, I’ve got your back, you’ve got my back, let’s do this. Let’s beat the bejesus out of these people,’ that’s cool.

“When it’s all about our freaking relationship and that’s forced, nobody was into that. Am I wrong? No everybody was like, ‘We get it! We don’t need to be told, shut the hell up!’ Sometimes I think over-explain things where it’s just like, let’s let people make their own minds and then whatever opinions they have, that’s their opinion,” she added. “And let’s go with that.”

Lynch’s next feud kicked off the following night when Sasha Banks returned to WWE television, turned heel and brutally attacked both Natalya and Lynch with a steel chair.