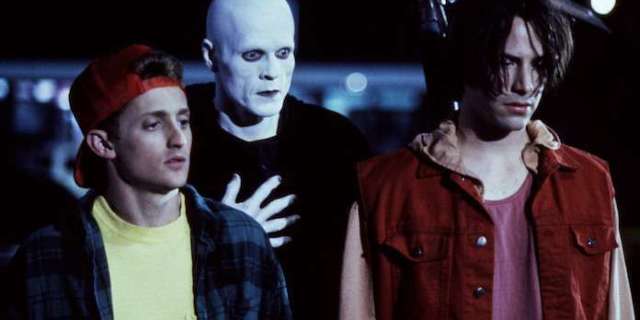 An Instagram post from a New Orleans musician has given fans a new look at William Sadler in the role of The Grim Reaper behind the scenes of Bill and Ted Face the Music. The film, which will be out in a little under a year, is currently in its last week of production. While not much is known about the plot of the film, it was revealed early on in the project’s development that Sadler would return as “Death,” a role he originated in Bill and Ted’s Bogus Journey in 1991. Like Ingmar Bergman’s Grim Reaper, Bill and Ted’s version will play a game of strategy in exchange for your life…

…but in Bogus Journey, Bill and Ted challenged the Reaper to a variety of games that were too modern to have caught his ancient and inscrutable attention, and forced him to return them to the land of the living. Originally their unhappy sidekick in their adventures, Death eventually warmed to Bill and Ted, and joined Wyld Stallyns, their world-changing band.

Bill and Ted Face the Music is in production now, targeting an August 2020 release date. The movie has been in development for years, from writers Ed Solomon and Chris Matheson with director Dean Parisot. The film will bring back Keanu Reeves and Alex Winter in their title roles, as well as reusing old footage featuring Carlin, and giving William Sadler another shot at the Grim Reaper role. Jayma Mays, Erinn Hayes, Brigette Lundy-Paine, and Samara Weaving will also appear.

“Following 1989’s Bill & Ted’s Excellent Adventure and 1991’s Bill & Ted’s Bogus Journey, the stakes are higher than ever for William Bill S. Preston Esq. (Winter) and Theodore Ted Logan (Reeves). Yet to fulfill their rock and roll destiny, the now middle-aged best friends set out on a new adventure, when a visitor from the future warns them that only their song can save life as we know it and bring harmony to the universe. Along the way, they will be helped by their families, old friends and a few music legends.”