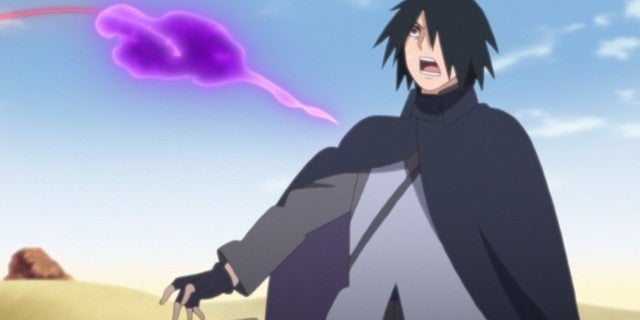 After a string of filler arcs, the Boruto: Naruto Next Generations anime will finally be returning to the story left over at the end of the Chunin Exams arc. With Sasuke officially making his return to the series after a several episode long absence, he is already embroiled in a high stakes fight with the also returning Urashiki Otsutsuki. Urashiki has already proved to be a tough opponent in his previous appearance, and he definitely keeps that up here with his return.

In Episode 120 of the series, Urashiki cripples Sasuke by stealing a huge amount of his chakra with his mysterious fishing rod weapon. There seems to be a hint that all of Sasuke’s chakra has been taken too as he can’t defend himself from being warped away at the end of the episode.

After failing to get to Sasuke’s location at the right time due to several shenanigans, Boruto finally catches up to Sasuke in the Wind Country. It’s here he sees both Sasuke and Gaara in battle against Urashiki, and he’s holding the both of them back with ease. While he doesn’t completely reveal what he’s after, Urashiki does say that he will be stealing both of their chakra before the “main event.”

As Sasuke tells Boruto to get away, Urashiki takes advantage of this distraction by hitting Sasuke in the chest with his fishing rod’s hook. Sasuke then is frozen in place with the hook in him, and Urashiki then pulls out a mass of purple chakra. This is reminiscent of when he used it at the end of the Chunin Exams arc against Mitsuki. While Mitsuki attempted to transform into his Sage Mode, Urashiki interrupts it in the same way and rips out his chakra with his hook.

Like Mitsuki before, Sasuke is left without his stamina after the crippling move. Without any options left, he charges straight at Urashiki. This frightens Urashiki, notably, but he manages to whisk Sasuke away through a portal he quickly opens with his Rinne Sharingan. This most likely won’t deter Sasuke for long, but every second he’s away will be dangerous for Boruto for sure. The effects of this fishing hook weren’t really elaborated on after Mitsuki was struck by it, so there’s no clear telling of how permanent this might be. But still, Sasuke being without chakra is definitely a problem.