The Champions edition of Britain’s Got Talent will launch this weekend on ITV with a number of former winners returning to the stage.

Amongst those performing once again is Paul Potts and George Sampson who will be competing to be crowned the ultimate winner.

But as the contestants fight it out on stage, it seems the judges will also clash with Amanda Holden and Alesha Dixon opening up on one particular row.

Judge David Walliams revealed: “There’s a lot of sexual tension, but not in the way you might imagine.”

Spilling more details of the clash, Amanda jumped in to explain: “It’s a good thing that me and Alesha are in the middle, that’s all I’m saying.”

But it sounds like it’s not just a one off as Simon Cowell noted: “I think Amanda and Alesha particularly last night.

“Credit to Alesha, you were on fire last night.”

“She never stopped laughing, I thought she was going to give birth,” Amanda laughed.

It certainly sounds like viewers will be entertained as the judges go head to head to find the ultimate champion.

Details of Amanda and Alesha’s clash come after Simon Cowell opened up on why Susan Boyle won’t feature on this year’s The Champions. 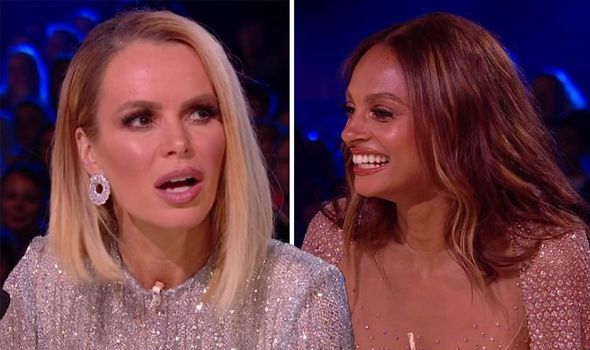 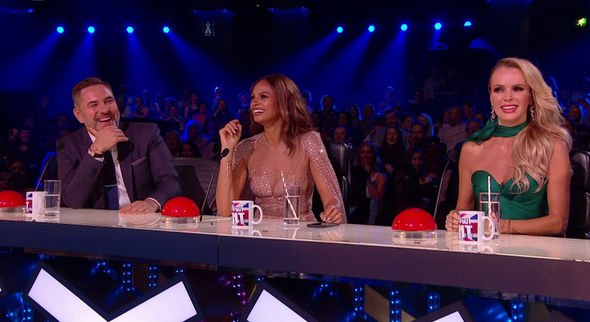 Britain’s Got Talent 2019: Amanda and Alesha will get into a fiery row (Image: ITV)

Speaking on Lorraine, he explained: “I don’t think she should have done it this year.

“She did America’s Got Talent Champions and if this does well, we’ll do it again next year and it will be an annual event.”

The media mogul added: “So you’ve got to save something.”

Fans will remember Susan’s now infamous audition back in 2008 when she wowed the judges with her performance of I Dreamed A Dream from Les Miserables.

While Susan made it to the finals, she lost out on the winning place to dance group Diversity.

This weekend will see the first ever Britain’s Got Talent winner Paul Potts return to the stage to perform.

Finally it will be up to American father-and-daughter duo Bello and Annaliese Nock’s daredevil circus act to wow the crowd.

Two acts will go through to the final rounds of the competition to compete to be the ultimate winner.

Britain’s Got Talent airs Saturday on ITV at 8pm.