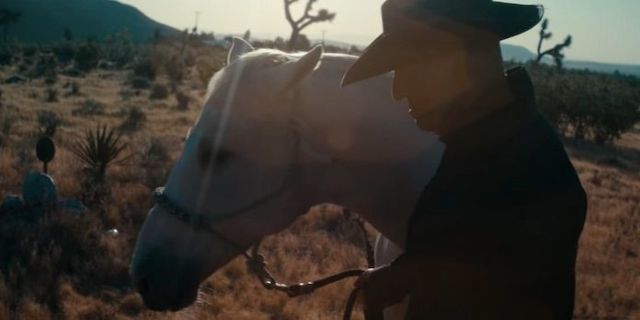 This October, Bruce Springsteen and his longtime collaborator Thom Zimny, a film and Broadway director who also acts as an archivist for Springsteen, will debut Western Stars, a feature film that will get a theatrical release and will center on the songs from Springsteen’s just-released album of the same name. Zimny, who has directed and/or edited numerous Springsteen documentaries, will share a directing credit with the music icon, marking what is technically Springsteen’s directorial debut. Other Zimny films have centered on Elvis Presley and Johnny Cash, and he served as an editor on The Wire. Springsteen will also serve as executive producer and provided an original score for the film.

Fans hoping to get an early look at The Boss’s big-screen production can do so by checking out Warner Bros.’ Blinded By the Light, which will begin carrying some Western Stars footage along with it today. In that film, an English teen of Pakistani descent finds meaning and inspiration in the music of Springsteen, and clashes with his more traditionalist parents, who do not understand what a white, American singer can have to say that speaks to their son’s experience. The film is based on the story of Javed Khan, “star” of Sarfraz Manzoor’s autobiographical novel, Greetings From Bury Park. You can hear my review here.

“Bruce lives in the super rarified air of artists who have blazed new and important trails deep into their careers,” said Warner Bros. Pictures chief Toby Emmerich, who announced the project. “With ‘Western Stars,’ Bruce is pivoting yet again, taking us with him on an emotional and introspective cinematic journey, looking back and looking ahead. As one of his many fans for over 40 years, I couldn’t be happier to be a rider on this train with Bruce and Thom.”

Springsteen has not yet toured in support of Western Stars, which was released on June 19. The film will apparently center on an intimate performance of the album for family and friends, although the record’s 50-minute runtime is significantly less than the 83 minutes listed on the website for the Toronto International Film Festival, where the film will make its debut.

Per Warner Bros., “Springsteen’s first studio album in five years, Western Stars marks a departure for the legendary singer/songwriter while still drawing on his roots. Touching on themes of love and loss, loneliness and family and the inexorable passage of time, the documentary film evokes the American West—both the mythic and the hardscrabble—weaving archival footage and Springsteen’s personal narration with song to tell the story of Western Stars. Western Stars offers fans the world over their only opportunity to see Springsteen perform all 13 songs on the album, backed up by a band and a full orchestra, under the cathedral ceiling of his historic nearly 100-year-old barn.”