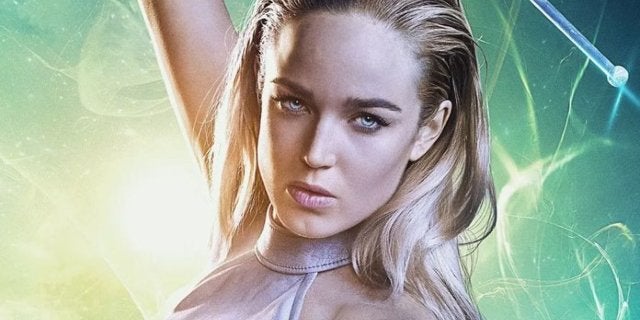 Arrow‘s salmon ladder is pretty much an infamous and iconic prop from The CW series. As that series is getting ready to wind down, Caity Lotz is gearing up her training for the exact same prop. A recent Reddit video shows her looking back on trying the ladder ahead of this season’s Arrowverse shows. Things went pretty smoothly, and that prop is going to have another day in the sun on Arrow.

The intense workout was featured in the very first episode of Arrow. That moment saw Stephen Amell, as Oliver Queen, do pull ups and, as he completed each one, move the bar up one rung higher each time. The workout was a visual reminder of just how strong and determined the future Green Arrow is and now, with the series coming to an end this fall, it serves as a reminder for Sara Lance.

At the Television Critics Association press tour this month, Amell said that the salmon ladder would be coming with him when it was all said and done.

“I’m taking it,” Amell teased. “I need one in my backyard to stay in shape.”

He went on to explain that the salmon ladder’s own interesting backstory. It turns out that the large structure was built for the show based on his real-life workout preparing for the role.

“The salmon ladder was something that [director] David Nutter saw when I was working out at a Tempest Freerunning, out in deep in the Valley out here,” Amell explained. “David got on the phone with the gym and was talking about what they had there, and he mentioned the salmon ladder, and so they just built one. That was it. It was a happy accident and I’m glad that we bring it back for the season premiere.”

The salmon ladder may not be the only blast from the past coming back for the season premiere, either. Back in July the series premiere’s title was revealed to be “Starling City”. As fans of the show will remember, Arrow‘s central location was known as Starling City for the first three seasons, eventually being renamed as Star City. Maybe White Canary could be headed back to where it all started as well? Only time will tell.

Fans will also get to see Moira Queen, Oliver’s mother, appear in the season premiere as well. Susanna Thompson is reprising her role in some capacity for the episode. Although Moira was sadly murdered in Season 2, Thompson has appeared on Arrow three other times, in a voice-only role in season 3, in the 100th episode, and again in the season 5 finale.

Arrow‘s final episodes currently have a lot riding on them, now that Oliver Queen has learned of his impending death in the “Crisis on Infinite Earths” crossover. Now Oliver is well aware of his fate – and was tasked by The Monitor (LaMonica Garrett) to help stop the coming “Crisis”, it sounds like the show will be addressing this threat while revisiting some concepts that fans have loved throughout the run.