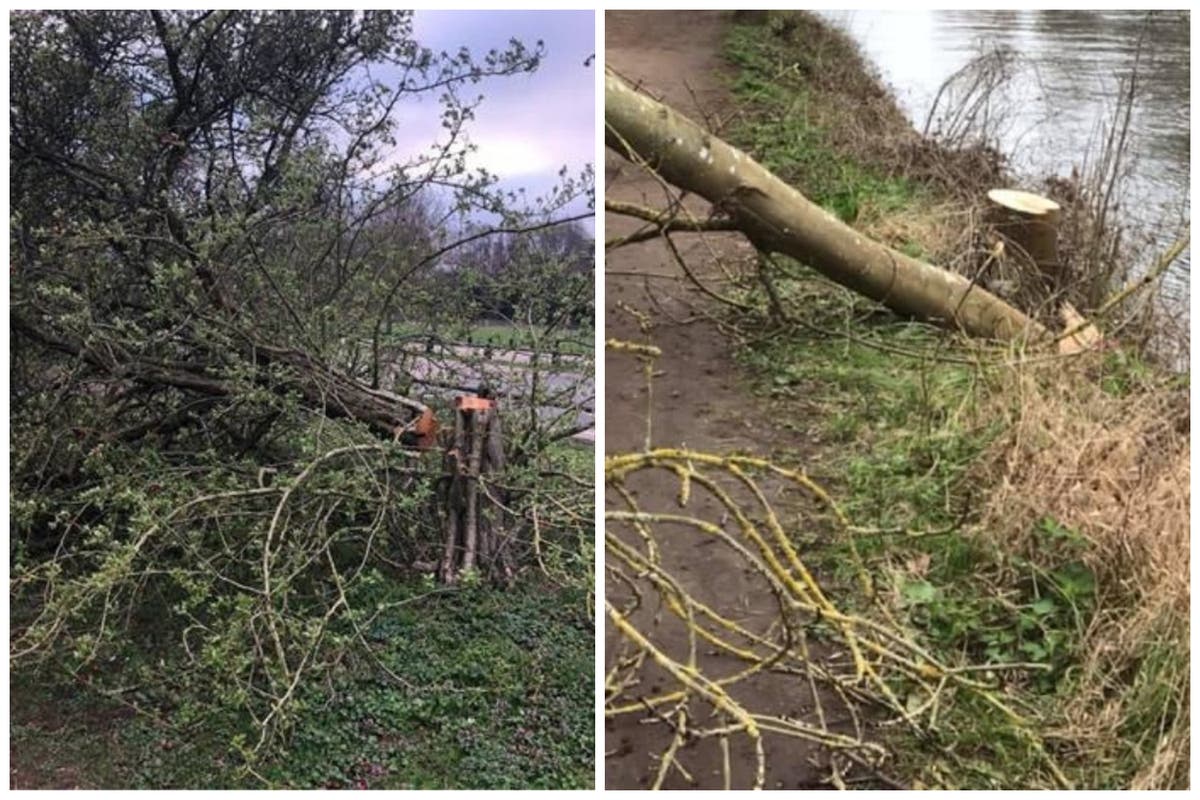 olice are hunting a mystery lumberjack who has chopped down dozens of tree along a picturesque stretch of the Thames.

The culprit has struck up to 30 times in the past ten days prompting locals in Walton, Surrey, to call in the law.

The lumberjack has no authorisation to chop down the trees and has not been spotted carrying out the secret missions and has been operating in the dead of night to avoid detection.

Extra police patrols have been drafted in on the two mile stretch between Walton and Weybridge where the lumberjack has been operating, armed with a chainsaw.

Pictures from the area show trees reduced to a stump and debris from the cutting down all over the towpath and nearby roads.

In a joint statement, Surrey Police and Elmbridge Council today blasted the “mindless damage’ and appealed for anyone with any information, including sightings or CCTV footage, to contact them.

The mystery chopper is targeting the ash, oak and elm trees and believe the culprit may drive a small, red car. The first tree was cut down on March 28, triggering complaints to the council and the police inquiry.

Anthony Cilia, a retired kitchen-fitter from Weybridge, was among the first to spot the damage to the trees, one of which was sliced into several pieces.

He told Mail Online: “For some days along the Thames towpath between Walton and Weybridge there has been a phantom chainsaw vandal cutting down trees in the early hours.

“Why this person is doing it is beyond me. There are plenty of wooded areas nearby to go to but for some reason they are choosing to do it in a public area on the banks of the river.

“Not only is it a blight on an area the council has spent several millions of pounds on improving but more importantly it’s dangerous.

“Several of the trees have been downed on to the road running past the Thames by Walton Bridge, which has very little light in the evenings so could cause a car accident.

“Other trees have been cut down over the pathway blocking pedestrian access, which is another potential hazard, or left submerged in the Thames in the way of boats that use that particular stretch of water.

“None of the trees look to have been chopped up for firewood, could it be someone with a grudge against the council? I don’t know, perhaps this person has mental health issues.

“What is worrying is that whoever they are, they have access to a chainsaw, powerful enough to slice through a 60cm tree trunk.”

Dwayne Morton, a coach at the Elmbridge Canoe Club, said: “The chairman has been informed and is now reviewing CCTV to see if the suspect or suspects have been caught on camera.

“One of the parents who was walking past yesterday evening has said that she saw two men standing outside the club looking suspicious.

“The trees that have been cut down are pretty hefty so it’s obviously taken some work to fell them.

“Some of the trees have been sliced through and have snapped forward into the water, which is a bit of a worry if they break loose and cause problems for boats.

“It seems a bit senseless to me, what purpose does it serve?”

Elmbridge Borough Commander Inspector Bert Dean, of Surrey Police, said: “I do not underestimate the impact this mindless damage has on the local community as well as the risk it has posed to motorists by obstructing roads.

“We are looking at every opportunity to identify who is responsible for this and will continue to work closely with Elmbridge Borough Council to tackle this issue.

“If you have any information which could help, and you have not already got in touch, please contact us.”

Hundreds have joined a Facebook group to report the incidents, with volunteers also monitoring spots near the river after dark, where several of the trees have been chopped down.

Local resident Moya Tytherleigh fumed: ‘It’s disgusting. Those trees could have had birds nesting them, it’s devastating to nature.

‘What has possessed someone to do it? I read on a local Facebook forum that there is a tree-felling task on the game Fortnight so maybe it’s some bored gamers cutting down trees in real life as some sort of lockdown dare or prank. Who knows?’

A message on the Elmbridge Tree Patrol group reads: “As you all know there’s a maniac going around Weybridge, Walton on Thames and Cobham chopping down trees ruining the environment, eco system, habitats and making everyone upset.

“I have set up this group so we can all as a community volunteer to patrol the area at night to try and hunt down and video record this lunatic.”