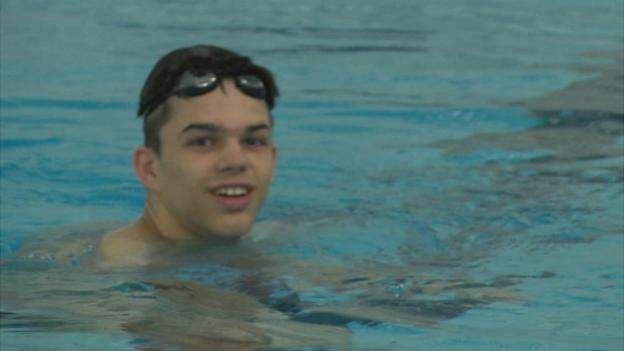 Few people in world sport can claim to be as dominant as Adam Peaty.

The British breaststroker is unbeaten in five years over 100m in major competitions, is well over a second faster than any of his rivals and has broken the world record five times.

But a 15-year-old from Plymouth could be on his way to emulating the great man.

“He’s a role model, an inspiration, I want to be like him,” says Cameron Williams.

The swimmer from the Dartmoor Darts club in Devon has just broken the British junior 100m breaststroke record for 15-year-olds, and also holds the record for ages 13 and 14.

That makes him faster at his age than Peaty, Britain’s current world silver medallist James Wilby or any of Great Britain’s great breaststrokers of the past like Adrian Moorhouse or Duncan Goodhew who, like Peaty, have won Olympic gold.

“I feel like I’m heading in the right direction,” adds Williams, who broke his latest record as he won silver at the European Youth Summer Olympic Festival in Baku last month.

“It feels like all the hard work I’m putting into the sport is paying off, it’s a great feeling.”

Williams is not your average swimmer. He is coached by his uncle, Matthew Henry, at the Dartmoor Darts club and trains in the evenings rather than the stereotypical early-morning starts that come to define the lives of most top swimmers.

“It’s better for us and more enjoyable. But it’s not as impressive when you say you’re a swimmer but you don’t really do the mornings. I can’t say I wake up at five to go swimming,” he says with a smile.

But what he does do in the evenings clearly pays off. His time of 1:03.15 in the final in Baku shaved a hundredth of a second off the best ever time by a British 15-year-old.

‘He will be able to do something great’

“There are people in swimming who develop early and are very good young and then don’t necessarily make it, but you also see people who develop young and go all the way to the top,” explains Henry.

“I feel that Cameron still has many areas where he can improve, I’m not concerned about him not being able to make it; I genuinely think he’s got a chance because there’s so many areas for improvement to come.

Find out how to get into swimming with our special guide.

“You’ve got to constantly look to be better all the time, otherwise you will stagnate and stand still and everyone else will go past you.

“We’re aware of that, we’re constantly looking for those improvements and we know people are chasing Cameron.”

While some are chasing Williams, everyone is chasing Peaty – the first man to go under 57 seconds for the 100m breaststroke. And in a time more than six seconds quicker than Williams’ best.

“It’s a massive bar to try and reach, but that is the end goal and I genuinely think Cameron is capable of doing it,” says his coach.

So will he be the next Adam Peaty?

“I’d much prefer to call him the first Cameron Williams,” Henry adds.

“He is his own man and he will be able to do something great in swimming, I have no doubt. Whether it’s beating Adam Peaty or not I’m not sure yet, but it’s the goal.”