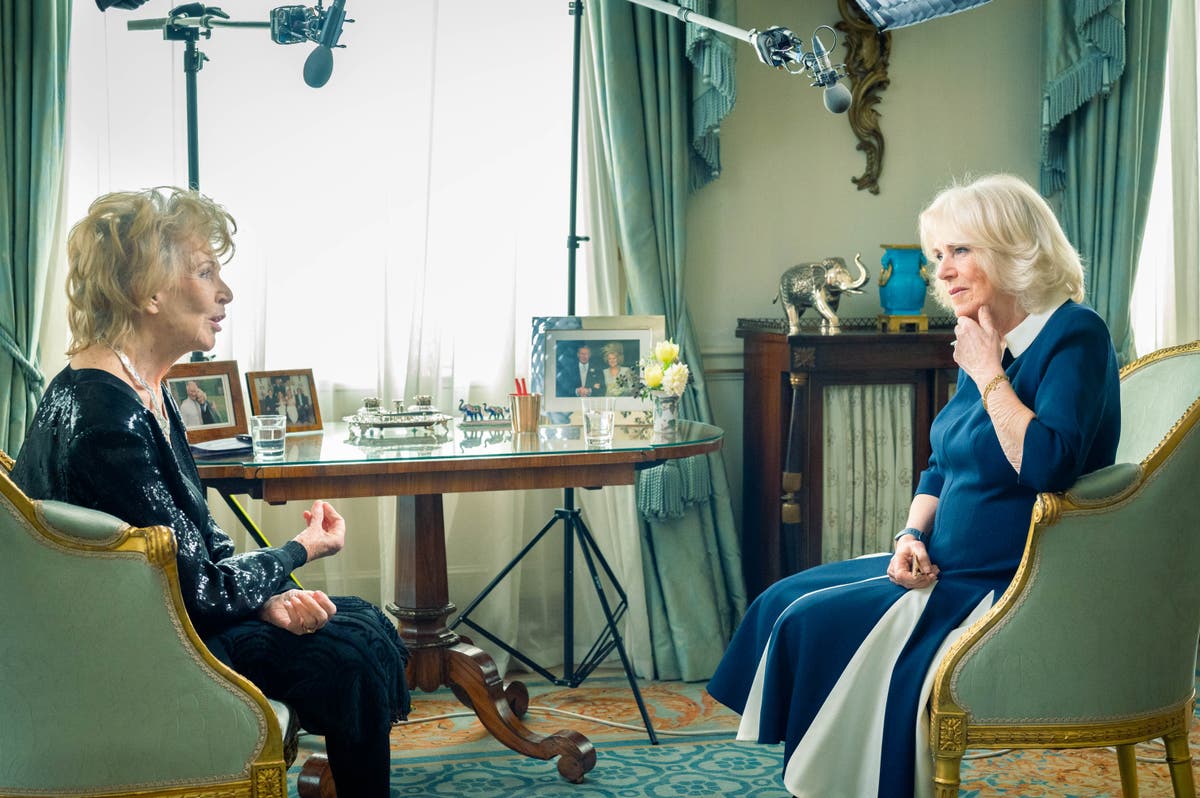 Camilla was pictured chatting with the Irish author in the morning room of Clarence House which is decorated with pale blue curtains and matching ornate chairs.

The pair discussed O’Brien’s book Girl, which the duchess picked as one of four works for season two of her Reading Room.

Camilla told O’Brien she was “very brave” to write Girl, which was inspired by the Nigerian schoolgirls who were kidnapped by Boko Haram terrorists in 2014.

After being quizzed by the duchess about why she chose the subject, O’Brien said: “One day, I was in a waiting room, a doctor’s waiting room, and I read a three-line piece of news, abbreviated news.

“A girl, Amina was her name, was found in Sambisa Forest by vigilante.

“She had a baby clinging to her, they had no food, she did not know her name, and she had lost her reason.

“There and then – because it’s funny about the incubation of a book – there and then I thought, ‘I’m going to write that story’. So it was a leap in the dark, definitely.”

Camilla replied: “It was a very brave leap in the dark.”

O’Brien added: “It was brave because I’m not young, but it was foolhardy as well. But I have no regrets about doing it.”

The duchess and O’Brien also spoke about the author’s famous trilogy The Country Girls, which was banned in Ireland in the 1960s.

It tells of the lives and loves of two girls in rural 1950s Ireland and Camilla told the author: “It was quite brave to write it then.”

O’Brien told the duchess how she penned the story out of loneliness.

“It did cause a bit of commotion, to put it mildly. People were very offended and my family were ashamed, and I had betrayed my country and a lot of tosh,” she said.

“But at the time it hurt very much. People say to me, ‘how could you have written that book?’

“And I said, ‘I have to tell you, I didn’t think there was anything offensive in it. I wrote it out of a loneliness’.”

As well as Girl, the other books chosen by Camilla for season two of her Reading Room are: A Gentleman in Moscow by Amor Towles, The Red Notebook by Antoine Laurain, and The Secret Commonwealth from The Book Of Dust trilogy by Philip Pullman.

In the duchess’s morning room, a silver elephant ornament can be seen on top of a cabinet while framed photographs of Camilla and the Prince of Wales on their wedding day, together at Balmoral, and with the duchess’s family, stand on the table.