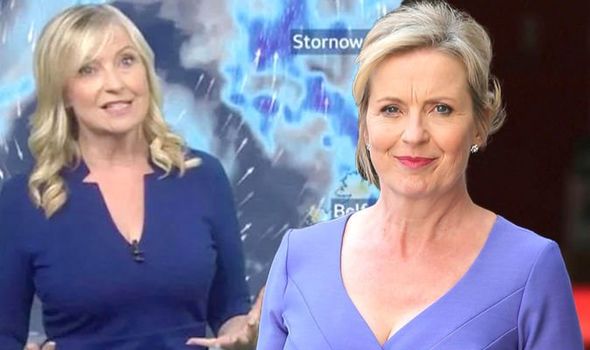 Carol Kirkwood urged two BBC Breakfast viewers to not “shoot the messenger” after they aired a complaint on Twitter. The BBC weather regular did not waste any time after being told she was “a harpy of doom” by a disgruntled wife at home. The 57-year-old pointed out it wasn’t her fault as she was told the fan’s husband had been far from pleased with her latest forecast. However, the star, who has been working as a weather presenter since 1998, certainly took the remarks well as the pair joked about the situation.

The user’s original message to Carol had read: “@BBCBreakfast @carolkirkwood CAROL! My husband Sean has just gone off to work calling you ‘a harpy of doom’.

“Please try to make the weekend weather nicer! We have a fence needing replacing. I will have to listen to him moan about it the whole weekend.”

It was then the small screen regular replied: “Nooooo!!! Don’t shoot the messenger!!!”(sic)

They then replied: “We have been married 35 years and every time it rains when he is off we have the same conversation!

“I will be glad when he finally retires in 2-3 years. I myself just love weather except the heat as I am menopausal and flushing constantly”

Carol, who regularly interacts with fans online, then added: “Bless you!! xx.” 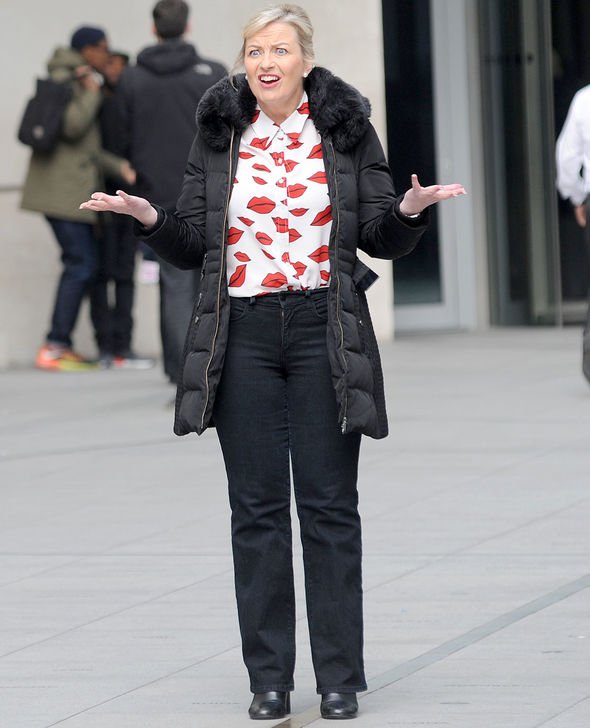 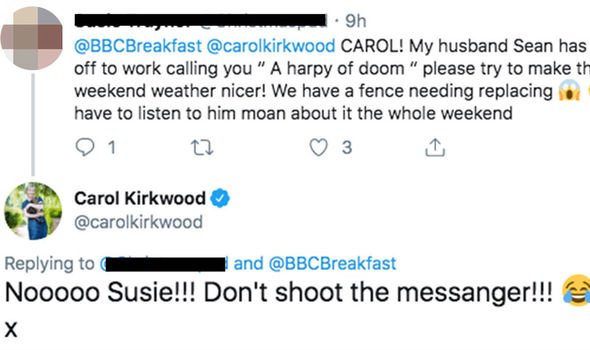 She had previously posted about what people could expect in the UK, and it wasn’t good news for those in the UK last weekend.

“Low pressure in Atlantic will cross us Friday and the weekend, bringing strong winds and rain for some @BBCbreakfast,” Carol posted.

Meanwhile, it comes after it was suggested that meteorologist Carol Kirkwood should be included in another segment of the show by one of her co-stars. 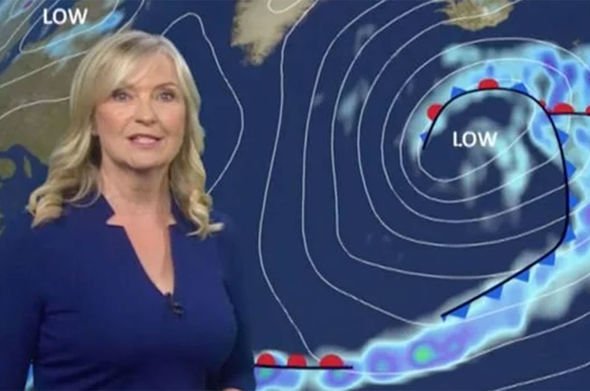 Last week BBC Breakfast was presented by Louise Minchin and Dan Walker, with the pair analysing the front pages of the newspapers.

They were joined by Steph McGovern and Sally Nugent to look at what was making headlines but Louise was keen to get Carol involved too.

Following the weather, she made it clear she wanted the ex Strictly Come Dancing contestant to be more involved, although she admitted she was probably “too busy”.

She told viewers: “Thank you very much Carol, 20 past seven here and very good morning. We’re going to look at the papers this morning.”

BBC Breakfast continues today at 6am on BBC One.