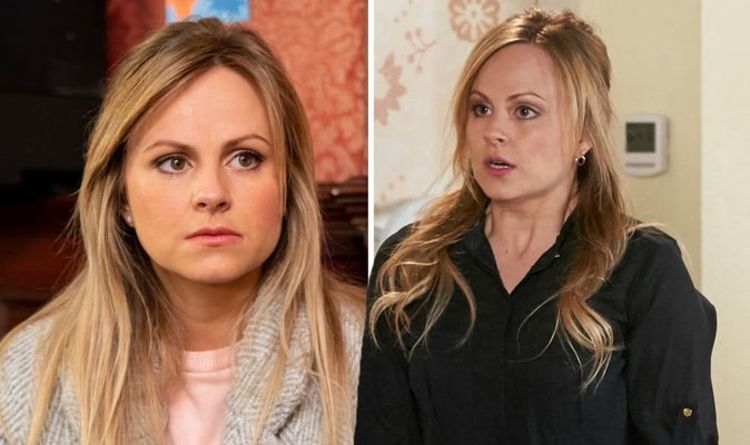 Sarah (played by Tina O’Brien) has had a lot to deal with recently on Coronation Street as her now ex boyfriend found himself falling into serious trouble.

But now Sarah is no longer with Gary Windass (Mikey North) viewers might expect her to be on a smoother path now.

However, as her love life is set to fall into chaos again, could she need an old friend for support on the ITV soap?

As a youngster, Sarah was best friends with Candice Stowe (Nikki Sanderson) and the teenagers were as thick as thieves.

She chose her pal to be godmother to her daughter Bethany (Lucy Fallon) whom Sarah gave birth to when she was just 13.

But Candice left Coronation Street behind for bigger things in 2005 as Status Quo invited her to be their stylist.

However, could the pair be reunited at some point?

Candice star Nikki appeared on Lorraine today where she was interviewed by stand-in host Christine Lampard.

She discussed where she was in her career at present as Nikki currently plays Maxine Miniver in Channel 4 soap Hollyoaks.

While the star declared that she was happy on Hollyoaks for the time being, she didn’t rule out a return to the cobbles.

Nikki shared: “At the moment I am definitely with Hollyoaks but Coronation Street will always have such a special place in my heart. I love it and I love the people and I loved every second of it.

“I love where I am. I love Hollyoaks, I love Maxine but I do love Corrie as well.

“It’s one of those…I couldn’t answer that.”

Sarah’s had a tumultuous romantic life this year after being involved in a love triangle with Gary and Adam Barlow (Sam Robertson).

She’s since finished things with Gary and has moved on with Adam but it looks as though the complicated situation won’t be ending any time soon.

Sarah actor Tina has hinted the relationship between her character and Adam could be jeopardised.

She’s revealed the Inside Soap that Sarah will be getting fed up with Adam’s squabbles with Gary.

“From her point of view, it’s a battle of egos between the two boys, and Adam needs to stop focusing on Gary and concentrate on Sarah,” Tina told the publication.

“So it’s going to be quite tricky, and will end up putting a lot of pressure on their relationship.”

Coronation Street continues tomorrow at 7.30pm on ITV, Lorraine airs weekdays at 8.30am on ITV.