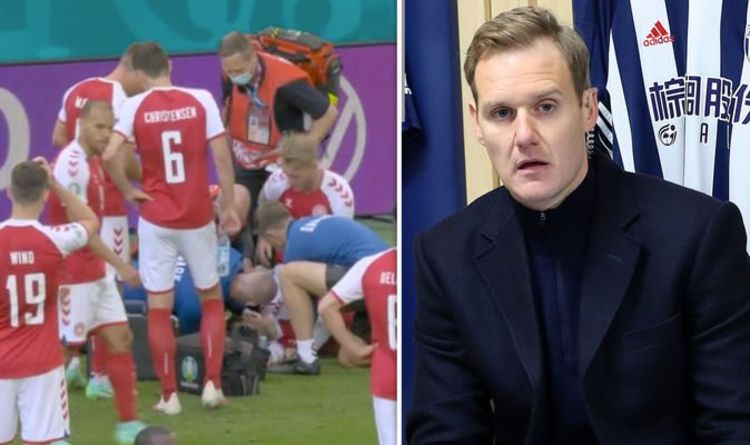 Taking to his Twitter page, the Football Focus host wrote: “This is sickening. How awful. #DEN.

“Both teams are understandably in pieces. This is unbelievably tragic.”

His co-star Alex Scott also reacted to the news after the game was postponed.

The football pundit struggled to fight back tears as she discussed the incident with Gary Lineker.

She said: “You’re thinking about his family and the rest of his players out there witnessing it as well.

“Actually just got on my phone and told my mum that I love her. It’s a reminder of how quickly life can change just like that.”

In a further post, Dan told his followers the incident had left him and his family “emotional”.

He commented: “I don’t know about you but we’ve have an incredibly emotional hour in our house.

“We watched it as a family & the kids have been asking so many questions & been desperate to know he’s ok.

“We’ve explained that it’s a long road ahead but it’s amazing to be able to share good news.”

Most recently, he praised Eriksen’s “inspiring” team mates for shielding him away from the cameras.

“Wonderful to hear Christian Eriksen is awake. Let’s hope he continues to improve,” he added.

“They demanded immediate medical help, screened him from the cameras, preserved his dignity and consoled his family.”

A statement issued by UEFA said: “Following the medical emergency involving Denmark’s player Christian Eriksen, a crisis meeting has taken place with both teams and match officials and further information will be communicated at 19:45 CET.

“The player has been transferred to the hospital and has been stabilised.”