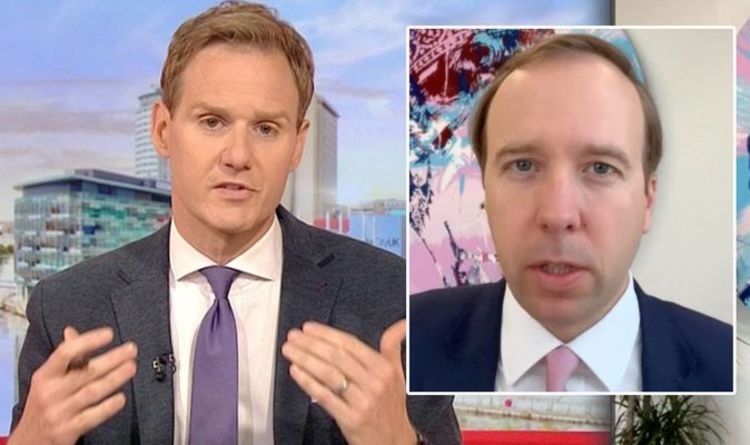 Matt Hancock discussed a wide range of topics with Dan Walker on today’s episode of BBC Breakfast, including the government’s ‘local lockdown’ on Leicester following a surge in coronavirus cases. The Conservative MP was also grilled by the BBC host on testing figures nationwide but Dan was less than pleased when he didn’t get the answer he’d asked for.

Keen for answers regarding testing, Dan put Mr Hancock on the spot as he asked: “Lots of people who knew you were coming on today, they were talking about transparency when it came to testing figures,”

Dan then revealed the BBC show had been flooded by questions from viewers who wanted a “simple” answer to the question of how many people had been tested.

Dan quickly found himself shutting down the Health Secretary’s answer, however, dissatisfied with the response.

“We’ve been trying to get to the bottom of for quite a few weeks and whenever we ask you – I think 39 days was the last time we got those official figures – so it’s about the actual number of people being tested.

“It’s quite confusing to talk about the numbers of tests being done rather the number of people being tested.”

Mr Hancock then detailed the challenges in providing a number as he responded: “So the challenge trying to get a measure of actual people tested, the way that it was measured, if you’d been tested at the start of the crisis then you wouldn’t count as someone being tested for the first time.”

He continued: “And at the start of the crisis that was a useful measure but now it’s much less though because if someone was tested in April and have been tested now it makes no difference.”

Mr Hancock then continued to refuse to give a specific number on testing, resulting in Dan taking one last punt at a definitive answer.

He quizzed: “Just to go back to my original point about transparency, we’ve had five weeks, 39 days since we got those official figures,

“Judging but what you just said, does that mean you’re not going to be publishing that figure?”