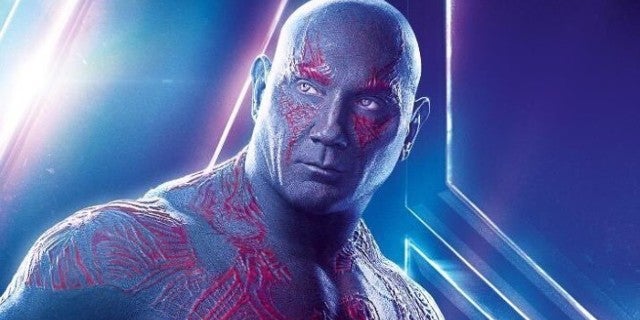 Dave Bautista is beloved for his portrayal of Drax in Marvel Studios‘ hit Guardians of the Galaxy films, but he is also a fan favorite off the movie set. One of the biggest reasons for that is that the actor never hesitates to share what’s on his mind, and he recently responded to a fan’s proposal of him playing a Batman villain with quite a bit of enthusiasm. He then shared a story regarding that and elaborated a bit on his love for superhero characters, and during that tweet he also said that Marvel Studios does not seem to see the worth in a Drax solo film.

“Point is I freaking love comic book characters and I want a stand alone,” Bautista wrote on Twitter. “@MarvelStudios doesn’t see worth in #drax or possibly myself or both but I’m not giving up. I missed out on a DC project because of scheduling conflicts but hopefully, there’s other characters & opportunities”

It seems Bautista is all for a Drax solo film, but even if that doesn’t happen he isn’t done with comic book characters by a longshot, as he also addressed the possibility of doing a DC project. He mentions that he missed out on a DC project due to scheduling conflicts, but he doesn’t say what that project was.

Point is I freaking love comic book characters and I want a stand alone. @MarvelStudios doesn’t see worth in #drax or possibly myself or both but I’m not giving up. I missed out on a DC project because of scheduling conflicts but hopefully there’s other characters & opportunities https://t.co/OX1XDnbmk9

The only current DC movie universe film that was shot before that was the original Man of Steel, so the role he is referencing could have been in films like Batman v Superman: Dawn of Justice, Suicide Squad, Wonder Woman, Justice League, Aquaman, and Shazam!, which have all hit theaters since then.

Another possibility is that he’s referring to a film that is currently in production, and the most interesting project int hat mix is The Suicide Squad. That film is being directed by James Gunn, who directed Bautista in the Guardians films. Gunn took that movie on during his ouster from Disney, though he would eventually return to the House of Mouse and Marvel to take on Guardians of the Galaxy Vol. 3. He will finish The Suicide Squad first though, so here’s hoping we at least get a cameo from Bautista in the film, but who knows, maybe he’ll show up somewhere else int the DC universe after his run at Marvel is done.

The crew is breaking it down in Episode 60 – covering all things casting. We’re diving into the the Mortal Kombat movie reboot, Venom 2, and Suicide Squad. We’ve also got comics of the week and more – all in today’s episode of #ComicBookNation! Make sure to subscribe now to never miss an episode!