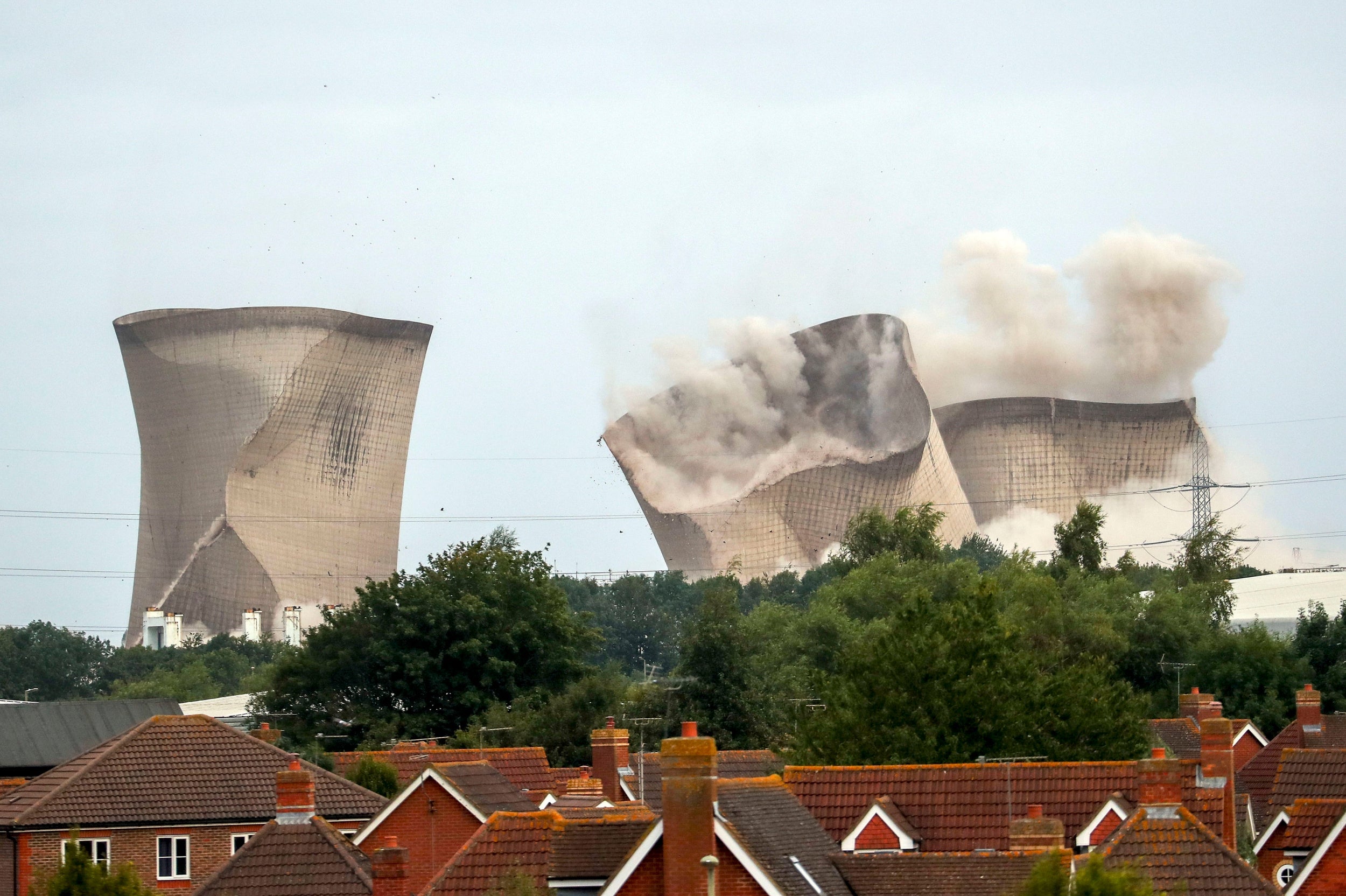 This is the dramatic moment the remaining towers of disused Didcot power station came crashing down, three years after four workers were killed on the Oxfordshire site.

Crowds gathered at sunrise to watch the demolition of Didcot A’s 375ft high cooling towers, which were razed to the ground in seconds.

Minutes after the controlled explosion, 40,000 people in the surrounding area suffered a power outage.

An electricity pylon could be seen bursting into flames nearby shortly after 7am on Sunday.

One mother described how her three-year-old daughter’s hair was burnt in a shower of sparks as the pylon caught on fire.

She told the Oxford Mail there was an “explosion” shortly after the towers came down and for “a brief moment” she thought someone had “let off fireworks”.

“But it rained down with sparks that burned, and we got burned,” she said, adding that her five-year-old daughter wasn’t hurt, but her three-year-old had suffered some burns to her hair.

Scottish and Southern Electricity Networks (SSEN) said an investigation was underway into the cause of the power failure.

A spokesman told the Standard: “Shortly after 7am this morning, SSEN received reports of damage to its network at Sutton Courtenay, following the demolition of the nearby Didcot Power Station.

“SSEN engineers attended site to make the situation safe and power was fully restored to the 40,000 customers affected by 8.20am.

“An investigation is underway as to the cause of the incident and SSEN is working with all relevant authorities. Further details will be shared once they are known.”

The mother and her daughter were among the crowds to flock to the surrounding hillside to watch the controlled blast, which saw Oxfordshire’s skyline change forever.

Christopher Huxtable, 33, Kenneth Cresswell, 57, John Shaw, 61, and Michael Collings, 53, died after the partial collapse of the boiler house at the power station in February 2016.

It took more than six months for the four men’s bodies to be recovered, prompting criticism from their families.

RWE Power, which owns the site, said it had planned the demolition over several months with its contractor Brown and Mason, liaising with the relevant local authorities.

Before the demolition, RWE project manager Tiernan Foley said: “For many people the demolition will mark a significant day for both Didcot and Oxfordshire.

“We would like to thank the local community for their support and all the people who have worked at the site.”

The owners had planned to clear the site by the end of 2017, but its plans were delayed in the tragic boiler collapse of February 2016.

The power station’s 655ft chimney – one of the tallest structures in the UK – will be demolished in the autumn.