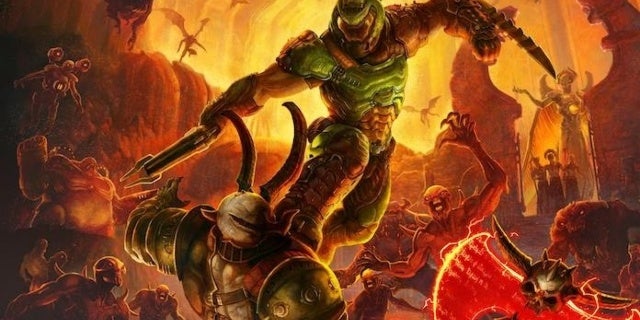 How long does it take to beat DOOM Eternal on PS4, Xbox One, PC, and Nintendo Switch? Well, it sounds like it’s going to take as long as 2016’s DOOM did, maybe a bit longer. According to executive producer on the game, Marty Stratton, the single-player campaign of the demon-slaying action-shooter will be about 18-22 hours long for a “pretty complete playthrough.” In other words, a completionist playthrough may be a drop longer, while a bum-rush on the easiest mode may be a bit shorter. Of course, player skill and difficulty level come into play as well. So, it sounds like the average playthrough will take about 20 hours long.

As you may know, 2016’s DOOM — which Eternal is a sequel too — took about 11-12 hours to beat if you just focused on the main missions. However, if you did some of the extra content on the side, it was more like 16 hours long. Meanwhile, if you went the completionist route, then you were looking at roughly 25 hours of content.

So, as you can see, it’s a pretty decent length for a first-person shooter campaign, which tend to not be very long. One of the best things about 2016’s DOOM is that it didn’t waste your time with filler content though. Hopefully DOOM Eternal replicates this. Don’t get me wrong, I love mowing through demon hordes like it’s a casual hobby just as much as anybody, but it can only be so impactful and adrenaline-fueled for so long.

DOOM Eternal is in development for PS4, Xbox One, PC, and Nintendo Switch. Barring any delay, it will release worldwide later this year on November 22, priced at $60. For more news, media, and information on the game, be sure to check out all of our previous coverage of it by clicking right here.

“As the DOOM Slayer, you return to find Earth has suffered a demonic invasion,” reads an official elevator pitch of the game. “Raze Hell and discover the Slayer’s origins and his enduring mission to rip and tear…until it is done. Experience the ultimate combination of speed and power as you battle your way across dimensions with the next leap in push-forward, first-person combat.”