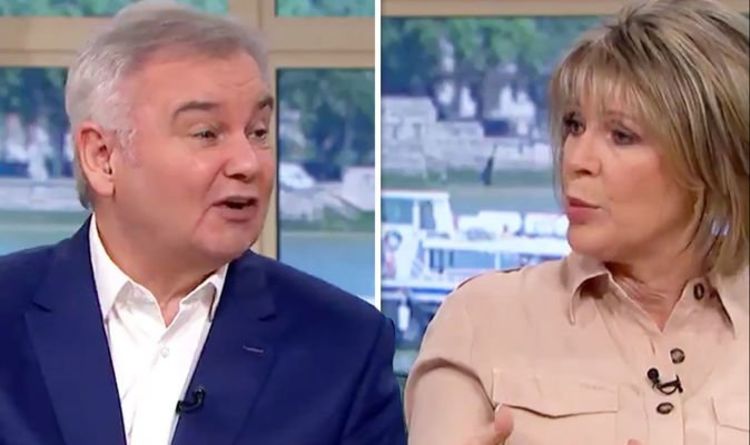 Eamonn Holmes, 59, and his wife and co-host Ruth Langsford, seemed to be on the same page when it came to their views on the matter. “I know you direct message people but, to me it’s just like texting,” Ruth said. “If you say, ‘Oh, I saw so-and-so did a new show or something. I must send them a message,’ if you didn’t have their mobile number, you would probably direct message them. So I don’t have a problem with that.”

This Morning favourite Eamonn proceeded to say he would innocently message people on Twitter but wouldn’t inform his wife.

“And I wouldn’t tell you if I’m doing that because you would be suspicious if I did tell you,” he said, turning to Ruth.

When guest and former Big Brother star Rebecca Jane, asked why he was “hiding” the messages from his other half, the broadcaster insisted: “It’s not hidden!

“She can look at anything and check,” he exclaimed, handing over his phone to Ruth to emphasise the point.

“I know the code,” his wife chipped in lightheartedly.

Eamonn went on to say Ruth wouldn’t like it if he came to her and said he was messaging someone, no matter how innocent it was.

Imitating her hypothetical reaction, he mimicked: “’Did you indeed?’ She’d bring that up.

“You wouldn’t like being told,” he told his partner.

Explaining his sociable, chatty nature, the This Morning presenter said: “I am an industry player, I get involved in my industry. Ruthie couldn’t care less.”

As Ruth smiled and nodded in agreement, he added: “Ruthie’d rather be washing the dishes, walking the dog.”

“I go home, go walk the dog, make the dinner,” she chipped in.

However, Ruth said she believed people’s response to their partner’s direct messaging others is dependent on their relationship, saying: “It does depend how you’re feeling about your relationship at the time.

This Morning later shared a clip of the chat with their 1.8 million Twitter followers, prompting viewers to take to the comments section in order to share their views.

“Fair enough we are married, doesn’t mean we can’t have human contact with other people. It’s literally impossible to get everything you need from one person, having a network of people is best!”