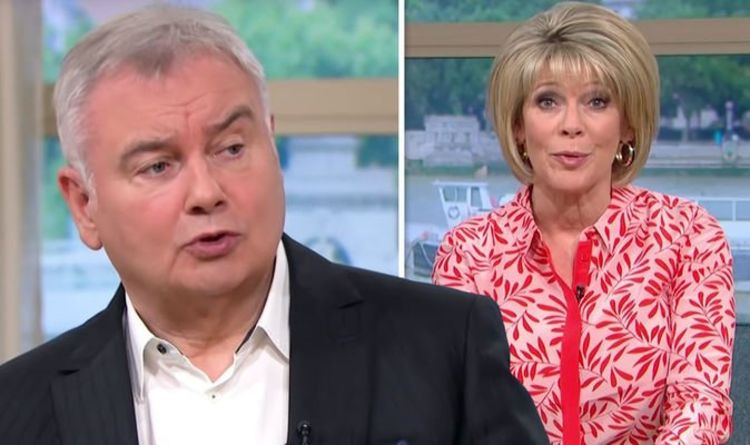 Eamonn Holmes, 59, hit out at the BBC on Twitter yesterday as he celebrated an emotional moment on This Morning. On the show, Eamonn and Ruth Langsford, 59, chatted via video link with bin man Ben and his 100-year-old friend Mercy, who was filmed looking overwhelmed when Ben celebrated her birthday by putting up flags and singing for her as a surprise. Eamonn shared the clip of the interview and Mercy’s adorable birthday surprise with his 994,000 Twitter followers, calling the bin man “the human face of service”. “A privilege to talk to him and Mercy this week,” he said.

Lashing out at the BBC, the This Morning presenter added: “In a world in which business and government despises the elderly… yes that’s you BBC license collection and let’s ‘raise the pension age’ think tanks…

“Thank God for people who care and respect.”

The sweet moment which sparked Eamonn’s outrage at the BBC’s plan to cut free TV licenses for over-75s saw him and his wife talking to Ben and Mercy about how their friendship began.

“I’ve been doing Mercy’s bins for about eight years now and it just started with her opening the door and saying, ‘Thank you’, really,” the bin man explained.

“He talks about the family, he tells me about the little kids,” she chipped in. “One day, when his wife had the baby, little girl, he said to me, ‘We’re going to call her Daisy.’

“We stand and chat about Mercy’s life,” Ben told the presenters.

Eamonn jokingly asked if Mercy ever allowed him to get a word in.

“She never lets me talk,” he quipped. “This is what it’s like every Thursday morning.”

Meanwhile, Twitter users took to the comments section in a show of support for Eamonn’s criticism of the BBC and praise for Ben, with Christine Lampard, 40, writing: “Well said Eamonn!”

“Hear hear @EamonnHolmes,” a fan said. “I could not have said it better myself it is disgusting the way the elderly are treated in this country they should be the most respected members of society.

“Everyone should be so proud of Ben’s lovely surprise.”

The planned loss of free TV licenses for over-75s has sparked much debate, with Gogglebox favourite June Bernicoff calling the decision “heartbreakingly unfair”.

The 81-year-old former Gogglebox star was one of a host of stars who signed an open letter to the Prime Minister, in partnership with Age UK, asking him to save the free TV license for over-75s.

“For many older people, television is their only company in the evenings,” she said.

“It is a lifeline that keeps them involved, entertained and engaged and to take that away from them would be isolating and heartbreakingly unfair.”