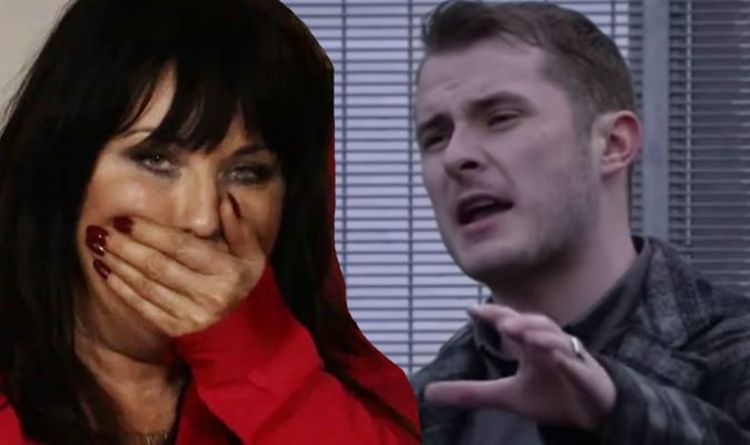 Ben (played by Max Bowden) has been desperately trying to pin the blame of Phil’s (Steve McFadden) attack on Keanu Taylor (Danny Walters), after his father replaced his own son with daughter Louise Mitchell’s (Tilly Keeper) fiancé in his will.

The young EastEnders gangster, along with viewers, know it was actually Stacey Fowler (Lacey Turner) who tried to kill Phil when he was launching an attack on her husband Martin Fowler (James Bye) and cousin Kat (Jessie Wallace).

Stacey and Martin soon fled the Square as Phil was laid up in hospital fighting for his life and tonight’s edition of the BBC soap saw the notorious bad boy return.

Even though Ben has tried to convince Phil it was Keanu who left him for dead, it seems the gangster’s memory was returning tonight and he sought out Kat for answers, only for her to betray his son which could lead to her murder.

After visiting the scene of the crime at the Arches garage, Phil arrived at the Slater household, surprising Kat as he let himself into the property.

Phil recalled the events of the explosive confrontation he had with Kat prior to his attack, with the Slater icon gasping for air as she waited for the bad boy to say Stacey had hit him.

However, Phil believed it was Kat who had tried to kill him as he knew he’d been hit from behind and hadn’t seen Stacey enter the garage.

Kat didn’t correct Phil as she wanted to protect Stacey and as he went to grab her, the Walford bad boy slipped.

With Phil on the floor, Kat goaded the ruthless gangster about finishing the job, before accidentally revealing he was pointing the finger of blame at the wrong person.

Acting fast, Kat made Phil promise to leave the Slaters alone but in the process, she threw his son Ben under the bus by exposing his lies.

Kat said: “That Ben of yours, he’s only out for himself. Don’t trust him,” as Phil looked on, seething with anger.

Although Kat didn’t explicitly reveal what Ben had been up to, she’s planted the seed in Phil’s head his son knows more about the Slaters’ involvement in his attack than he’s letting on.

Phil is likely to grill his son over Kat’s admission, but if he tells Ben where he got the information from, the killer could set out to murder Kat.

Ben has previous offences when it comes to murder, having killed Heather Trott (Cheryl Fergison) in 2012 when he thought she’d reported him to the police.

With Ben losing his anger so quickly, could history be about to repeat itself as he murders Kat for betraying him?