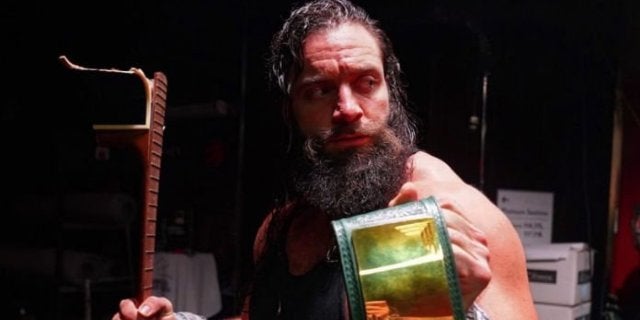 Elias has been giving live “musical performances” on Monday Night Raw, SmackDown Live, pay-per-views and live events ever since he was called up to the main roster back in 2017. However that may be coming to an end on this week’s episode of Raw, according to what he said on WWE’s Instagram story on Monday afternoon.

“The Drifter” won the WWE 24/7 Championship during last week’s episode of Raw, and he explained that because of the title he can’t risk performing live concerts anymore.

“Hello I am Elias, and right now I am going through what could be my final sound check,” Elias said. “Due to the prestigeous and honorable 24/7 title, it’s just too risky to be out here performing live every week. So tonight, I’d get your tissues ready because it’s going to be good, it’s going to be great, it’s going to be emotional — Elias’ farewell performance.”

Elias won the title by nailing R-Truth in the back with a guitar during a backstage segment. Odds are Truth and Carmella will try and find some way to get the title back tonight during that segment.

Another former champion desperate to get the title back is Drake Maverick. The four-time 24/7 Champion attempted to jump Elias during a recording session over the weekend, only to get beaten up for trying.

HOLD THE SHOW – MY FLIGHT IS DELAYED 😫 https://t.co/yrBBz8LPwQ

On top of being 24/7 Champion, Elias is also one of 16 competitors in the returning King of the Ring tournament. The first matches in the bracket will take place on Raw tonight, including Samoa Joe vs. Cesaro and Cedric Alexander vs. Sami Zayn. The tournament will take place on WWE television across the next couple of weeks, leading to the semifinal matches at the Madison Square Garden episodes of Raw and SmackDown. The final bout will take place on Sept. 15 at the Clash of Champions pay-per-view.

Other contestants in this year’s bracket include The Miz, Ricochet, Drew McIntyre, Baron Corbin, Kevin Owens, Ali, Andrade, Apollo Crews, Chad Gable, Shelton Bejamin and Buddy Murphy. Elias is slotted to take on Owens in his first-round match on Tuesday.