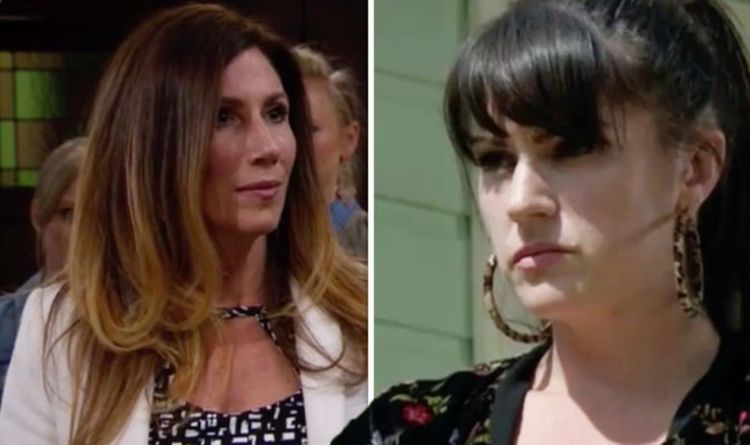 Frank was killed when he was caught in the factory explosion after risking his life to safe his daughter, Tracy Metcalfe’s (Amy Walsh) life.

Since the blaze, the police concluded Frank was to blame for the explosion and have closed the investigation.

However unbeknownst to the villagers, Amy (Natalie Ann Jamieson) and Kerry Wyatt (Laura Norton) caused the blaze after destroying CCTV equipment that implicated them in a robbery.

Megan has struggled to cope with the loss Frank and is rocked in upcoming scenes when she discovers the ring box he was retrieving when he was killed.

Realising Frank was planning to propose, Megan begins to question her future in the village.

Before the funeral, Tracy tries to prove her dad’s innocence but is angered when her sister, Vanessa Woodfield (Michelle Hardwick) doesn’t feel the same way.

In the church, Megan snaps and delivers some tough words to the congregation.

Has she discovered who was really behind the devastating blaze?

Later on she makes a life-changing decision as she contemplates whether she has anything to stay for in the Dales.

Emmerdale star Gaynor has filmed her final scenes for the ITV soap so it seems as if Megan will be saying goodbye to the village for good.

But it looks like she will deliver some shocking news to the villagers before she leaves.

The pair have been sneaking behind their partners’ backs but it might not be long before Amy and Can Dingle (Jeff Hordley) find out.

All clues seem to suggest Cain will be the one who walks in on the pair after a few near-misses.

However as Amy struggles to cope with her guilt over Frank’s death, a shock confession may lead to Nate revealing all.

Ever since the blaze, Amy has become distant from Nate which has only pushed him further into Moira’s arms.

While Kerry warned her to keep quiet, Amy has been wracked with guilt especially since Frank was blamed for the blaze.

Could Amy finally open up to Nate and reveal the role she played in the factory fire?

If she does reveal all, Nate may decide to be completely truthful too.