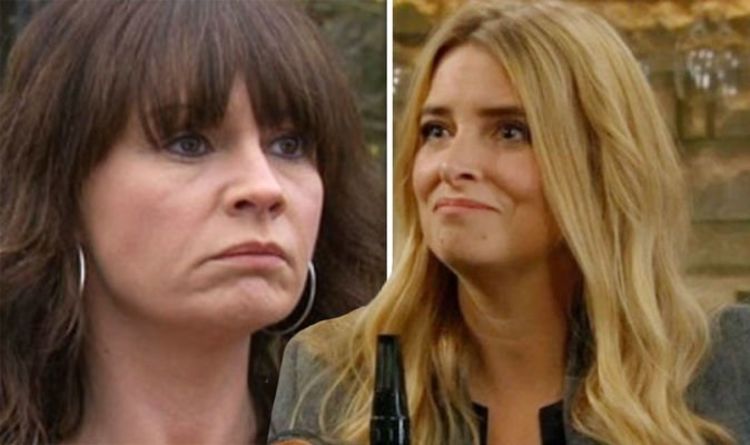 The Woolpack pub has been a part of the very fabric of Emmerdale since the ITV soap first launched on screens in 1972.

A key set for the villagers to congregate in various scenes, the pub has also undergone various management changes over the years.

The latest has seen Charity (played by Emma Atkins) and Chas Dingle (Lucy Pargeter) take over the business in a joint partnership, and has allowed for the group to live together in the rooms behind the pub.

Now though, a heartbreaking new plot could see the pub shut down for good, as the building is suffering from dry rot.

While Charity and Vanessa Woodfield (Michelle Hardwick) are moving in to Debbie Dingle’s (Charley Webb) old cottage with their children, the pub owner will still be dealing with the building difficulties.

Chas has been absent from the village for a few days, being heavily pregnant with hers and Paddy Kirk’s (Dominic Brunt) baby, so is out of the loop when it comes to the pub’s latest problems.

Solving the wood decay can easily be done, but it required a lot of time and money to fix.

If Charity and Chas realise they don’t have the funds needed to treat their livelihood, would it be better to shut down the pub for good and move on to a new location?

Or perhaps rebuild a bigger, better business instead?

It’s only weeks until Chas is due to give birth to hers and Paddy’s miracle baby on the ITV soap, so the news they might have to uproot will undoubtedly come as a shock.

The couple were devastated last year when they discovered their baby was suffering from a kidney condition.

They decided to go through with the pregnancy and named their newly-born daughter Grace, whom passed away shortly after entering the world.

The upsetting scenes carried on on the ITV soap for months, with Chas and Paddy struggling to move on from their heartache.

But with a new year came the unexpected news they’d fallen pregnant again, and the couple were keen to build a life for their baby’s future.

Determined to prevent her cousin and Chas’s husband from suffering any more pain, Charity comes up with a new harebrained scheme to keep the business running.

Knowing Charity’s history with such plotting, fans can probably expect things to go horribly wrong for the Woolpack and its owners.

If her plan is illegal, Charity will be putting her own relationship with Vanessa in danger, as the pair have been struggling to get on in recent episodes.

When the vet’s father Frank Clayton (Michael Praed) died in the horrific factory fire, she was unimpressed at the way her fiancee handled the aftermath, and even chose to stay with Tracy Metcalfe (Amy Walsh) instead.

Will this tip the fan-favourite couple over the edge?