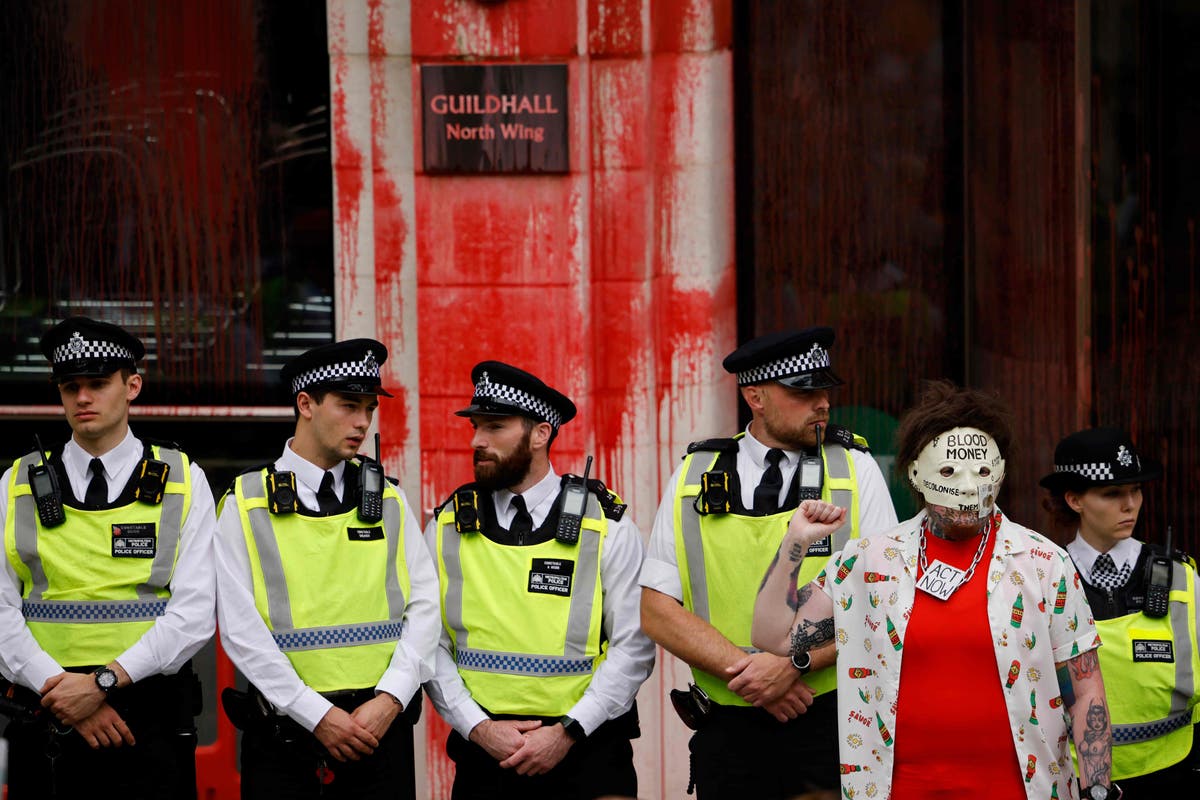 Demonstrators have erected structures to block traffic and used increasingly complex tactics to frustrate police efforts to remove them, including gluing themselves to the pavements and locking their bodies to scaffolding.

Scotland Yard said around 480 XR activists have been arrested so far – with 2,000 Met officers-a-day dedicated to tackling the protests – as Deputy Assistant Commissioner Matt Twist launched a broadside at the “very serious and totally unreasonable disruption”.

“They have the right to protest and assemble together, but this right must be balanced with the rights of others – those wanting to go about their lawful business unimpeded and without disruption,” he said.

“Whatever the cause, activists do not have the right to cause unreasonable and serious disruption to London’s communities.

“In the past two weeks, we’ve seen activists overstep this. They’ve blocked traffic on two of London’s busiest bridges, defaced iconic landmarks and disrupted critical road junctions. Commuters’ journeys have been delayed, businesses had deliveries cancelled and the owners of landmarks have faced costly repairs.

“This action is unfair, unreasonable and unlawful. To worsen matters, activists frustrate our response by setting up complex structures or by gluing and locking onto devices.”

DAC Twist said 133 people have locked on to structures or glued themselves, forcing officers into “painstaking and hugely complex” efforts to remove them.

“This work takes time and has demanded thousands of officers each day to respond effectively. These are officers taken elsewhere from London. The impact of XR’s protracted action on London communities should not be underestimated”, he added.

“Every time several officers are needed to arrest a single activist, these are officers diverted from our number one priority, bearing down on violence. We are highly resilient but it is frustrating that communities are denied their officers in order to deal with a very protracted protest.”

He also suggested many Londoners “are likely sick of this protracted disruption” as the city recovers from the pandemic.

Justifying its actions, Extinction Rebellion London wrote on Twitter: “We will leave the streets when the Government starts treating the climate emergency like an emergency.

“Covid showed what the Government can do in a crisis, it’s the level of response required for the climate but sustained over years.”

XR protests and arrests have also had a knock-effect on the justice system in the last two years, taking up thousands of hours of court time as hundreds of case go to trial.

Activists have also taken direct action in the courts themselves, gluing their hands to the dock and filming proceedings.