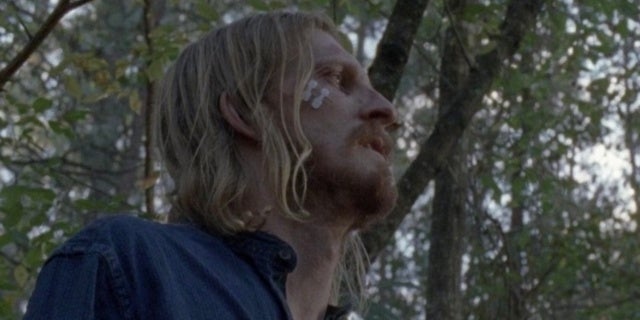 Daryl exiled Dwight (Austin Amelio) from the Virginia settlements in TWD’s Season 8 finale, “Wrath,” where Daryl told Dwight to find missing wife Sherry (Christine Evangelista) and “make it right.” It’s a second chance that brought Dwight to Texas, where he’s since linked up with Morgan (Lennie James) and his people who set out to make up for past wrongs by helping needy strangers.

This mission brought Morgan’s group into conflict with an opposing group overseen by Logan (Matt Frewer), who wants the fuel recently claimed by Morgan and his crew.

When Rollie (Cory Hart) follows and then captures the lone Dwight in an attempt to seize the gas, he first threatens Dwight with bodily harm before saying he’ll hunt down Sherry himself. But Dwight gets free and turns the tables on his captor, who taunted Dwight for being an “asshole” and carrying an unloaded gun.

“You want to know why my gun wasn’t loaded before? Because you were right. I am an asshole. Or used to be one,” Dwight says. “And the way things are going lately, I didn’t trust myself not to be that again. Someone gave me a second chance… and it’s the same chance I’m giving you.”

Rollie is in the same place Dwight was more than a year earlier. “When you walk out of these woods, you’re gonna have a choice to make,” Dwight says. “You can go on being an asshole, or you can figure out someone else to be.”

He then cuts Rollie loose and tells him to go.

When bringing Dwight over to Fear in “Humbug’s Gulch,” where Dwight ran across lovers John (Garret Dillahunt) and June (Jenna Elfman), showrunners Andrew Chambliss and Ian Goldberg wanted to explore a character who’s overarching themes aligned with Morgan and his people.

“It was exciting for us to sit down with Austin because we’re huge fans of his character and of the work he did on The Walking Dead. But what we thought was cool and what we got excited about with bringing Dwight onto Fear is that it was going to be a redemption story, and we were going to see a more hopeful side of Dwight start to take shape,” Goldberg previously told EW.

“And obviously when we find him, he’s not in a hopeful place. And this episode, it’s quite the opposite where we know that when he left The Walking Dead at the end of season 8, Daryl spared his life and told him to find Sherry and make it right. We see that that hasn’t been going very well for him. And he’s in a desperate, low place where he doesn’t believe he’s ever going to find her or ever make things right, which puts him in a position where he’s at the end of his rope.”

Dwight’s new friends helped pull the ex-Savior out of his funk, redirecting him towards a selfless life filled with purpose — one that could result in Dwight making the ultimate sacrifice.

“And like everyone else in the group — from Morgan to Alicia, Dorie, June, really everyone in our group — Dwight’s someone who has things to make up for, and now he’s found a new family that he’s going to be able to do that with. And it’s going to be a challenge for him,” Goldberg said. “But we’re going to see a different side to Dwight than we saw for a lot of The Walking Dead.”