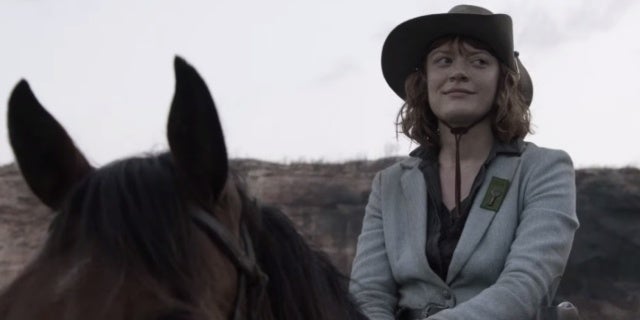 Fear the Walking Dead will continue to add to its ranks as Morgan (Lennie James), Alicia (Alycia Debnam-Carey) and their on-the-move group encounters more survivors — both good and bad — all promising to be “fun” and “surprising.”

Lone survivor Wes (Colby Hollman), who first ran afoul of bad guy Logan (Matt Frewer) in “Channel 4,” will use the recruitment tape and left behind walkie talkie to get in touch with Alicia and Strand (Colman Domingo) as they work to reconnect with the convoy after nearly exhausting their share of gas.

It’s fuel that has put the group in the sights of Logan and his heavily armed thugs, who are desperately hunting our heroes in their search for the oil fields. One of these thugs, Rollie (Cory Hart), attacked and captured Dwight (Austin Amelio) before Dwight turned the tables; he then set Rollie free, giving him the same second chance Daryl (Norman Reedus) once gave Dwight.

Also still ahead is a group of cowboys on horseback and a currently identified character played by series newcomer Holly Curran (The Marvelous Mrs. Maisel), who joins in a recurring role.

“She will be playing a character who is going to help someone make a fundamental change in their beliefs. That’s all I want to say,” Chambliss teased. “But we were excited to have her join the cast and she’s done a fantastic job, so we’re excited for people to see that story.”