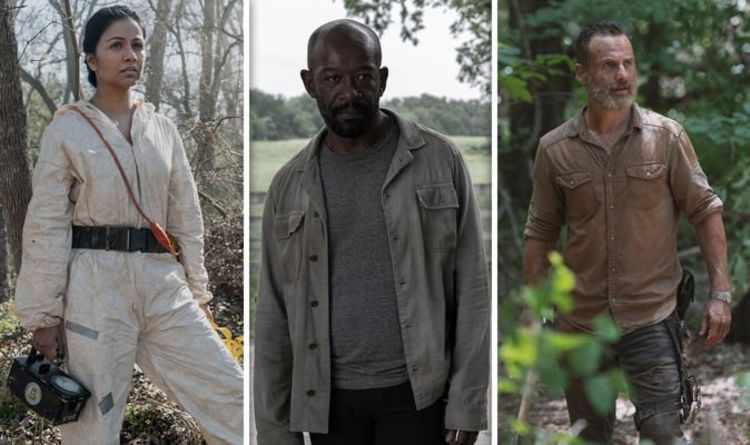 Fear The Walking Dead saw another heartbreaking moment for Morgan Jones (played by Lennie James) after fans witnessed the character finally open up and find happiness for the first time since losing his family.

Fans had seen the bond between Morgan and Grace (Karen David) grow as the pair set off on a mission to help a man who had been bitten by the Walkers.

The episode seemed to tease a potential romance for the pair all before taking it away as Morgan began to distance himself.

Fans of the AMC spin-off will know Grace had been living with radiation poisoning and was exhibiting more and more alarming symptoms as time went on.

However, this all became too much for Morgan as he chose to walk away after Grace refused to visit an urgent care facility, deciding to live life as long as she can rather than finding out her prognosis.

At the end of their mission, Morgan made the shock announcement: “I’m not coming with you.”

Although the character conjured up an excuse of going to help Alicia (Alycia Debnam-Carey), both knew the real reason behind Morgan taking off.

Grace responded in a whisper: “Of course, Of course.”

“But you be safe, will you? And I’ll see you soon.” said Morgan.

However, the tearful goodbye left fans with the impression the two would never see each other again.

Could Grace die before they meet again?

Meanwhile fans were furious Morgan left Grace behind, with many feeling he should have allowed himself to move on.

One fan tweeted: “#FearTheWalkingDead WHY MORGAN! SHE WAS SO HAPPY! AND YOU WERE SO HAPPY! WHY WOULD YOU BREAK HER HEART LIKE THAT. WHAT THE F**K IS WRONG WITH YOU. He was her reason to live…”

A second tweeted: “I was really liking Grace and Morgan. It was nice that he had a reason to smile again. Then he had to go and mess it up! #FearTWD #FearTheWalkingDead”

The storyline comes after Dr. Eugene Porter star Josh McDermitt spoke out about the shock ending to the comic book series after creator Robert Kirkman secretly released issue 193 with no word it would be the last one.

Josh begun: “I loved it, I thought it was awesome the way he did it.

“I love the comics, and I buy every issue, or try and get the volumes or the compendiums and go through it, because there’s a lot of great stuff there.

“And obviously the show takes detours from what’s happening in the comics and that sort of thing, so it’s fun to have a totally separate story that you can follow along and see the variations.”

“But for him to end it the way he did, I was shocked, and surprised.