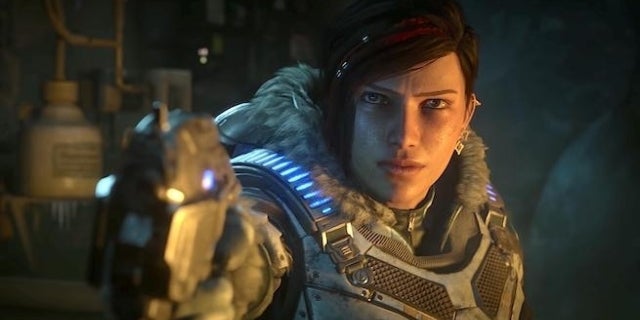 The highly anticipated next installment in the long running Gears of War franchise will be arriving in just a little over a week. With a bit of testing already under its belt, it would appear that fans are pretty excited for what Gears 5 has to offer. When it comes to the campaign, however, the title will surely have plenty in store for those who take it on. During a recent interview with GameSpot, The Coalition’s Rod Fergusson talked about the upcoming game’s main story and how the dev team was inspired by open world titles and how they tried to make Gears 5 “feel more open and expansive.”

“I was just saying earlier that when we started, you couldn’t get off the Skiff until you pulled up to a dock, and now we’re like, “That’s too limiting,” so now you get off wherever you want,” Fergusson said. “So what does that mean for the world and how do we stream it in? That kind of stuff. So there was just a lot that we had to go through to figure it out. And fortunately we had people from Assassin’s Creed and Far Cry, we had people who had previous lives that had been on those types of games.

“And we just knew that we weren’t trying to be another Red Dead or Far Cry or Ghost Recon. We were just saying, “How can we take Gears and make it feel more open and expansive without trying to go toe-to-toe with Ubisoft?” Because that’s not really what this game is. We just wanted to take inspiration from genres we love to give a bit more freedom and that idea of player choice.”

Gears 5 will officially be released on September 10th for PC and Xbox One. Those with an Xbox Game Pass subscription will have the opportunity to play it a few days early. For even more on the upcoming title, including how it is the biggest title in the series yet, check out some of our previous coverage as well as the brief description below:

“From one of gaming’s most acclaimed sagas, Gears is bigger than ever, with five thrilling modes and the deepest campaign yet. With all-out war descending, Kait Diaz breaks away to uncover her connection to the enemy and discovers the true danger to Sera – herself.”

What do you think about all of this? Are you glad that the Gears 5 devs were inspired by more open world titles while developing the upcoming game? Sound off in the comment section below, or feel free to hit me up over on Twitter @anarkE7!